[AUTOGRAPH LETTER, SIGNED, FROM ANDREW JACKSON TO PHILADELPHIA BOOKSELLER MATHEW CAREY, THANKING HIM FOR A GIFT OF SEVERAL BOOKS] 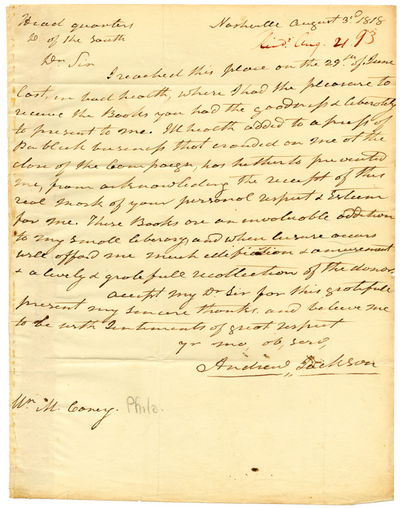 by Jackson, Andrew
Nashville, 1818. [1]p. Quarto. Old fold lines. Contemporary paper strip along left edge on verso. Minor toning. Very good. Andrew Jackson writes to Philadelphia publisher and bookseller Mathew Carey, thanking him for a gift of some books. The letter was written from Nashville after Jackson's return from the Seminole campaign. Jackson has addressed his letter from Headquarters, Department of the South, writing: "Dr. Sir, I reached this place on the 29th of June last, in bad health, where I had the pleasure to receive the books you had the goodness & liberality to present to me. Ill health added to a press of publick business that crowded on me at the close of the campaign, has hitherto prevented me, from acknowledging the receipt of this real mark of your personal respect & esteem for me. These books are an invaluable addition to my small liberary [sic], and when leisure occurs will afford me much edification & amusement & a lively & gratefull recollection of the donor. Accept my dr. sir for this gratefull present my sincere thanks...." As a former lawyer, Congressman and judge, Jackson had a decent library, although mostly comprised of law and history books and political pamphlets. He remained commander of the Southern Division of the army until 1821, when he resigned his commission and became governor of Florida. This letter is marked as "Rec'd Aug. 21," likely in Carey's hand. (Inventory #: WRCAM52248)
$9,500.00 add to cart or Buy Direct from
William Reese Co. - Americana
Share this item

[COLLECTION OF RESEARCH MATERIAL RELATING TO THE HISTORY OF VOTING IN THE UNITED STATES, COMPILED BY NOTED HISTORIAN ALBERT BUSHNELL HART, WITH HUNDREDS OF EXTRACTS, CLIPPINGS, AND CITATIONS, PLUS OVER FORTY BALLOT-RELATED IMPRINTS AND EPHEMERAL ITEMS]

[Various locations 1920
(click for more details about [COLLECTION OF RESEARCH MATERIAL RELATING TO THE HISTORY OF VOTING IN THE UNITED STATES, COMPILED BY NOTED HISTORIAN ALBERT BUSHNELL HART, WITH HUNDREDS OF EXTRACTS, CLIPPINGS, AND CITATIONS, PLUS OVER FORTY BALLOT-RELATED IMPRINTS AND EPHEMERAL ITEMS])

[London : Printed for Robert Sayer , 1768
(click for more details about A MAP OF THE COUNTRY ON THE OHIO & MUSKINGUM RIVERS SHEWING THE SITUATION OF THE INDIAN TOWNS WITH RESPECT TO THE ARMY UNDER THE COMMAND OF COLONEL BOUQUET.... [and:] A SURVEY OF THAT PART OF THE INDIAN COUNTRY THROUGH WHICH COLONEL BOUQUET MARCHED IN 1764)
View all from this seller>