Cathedral Music dedicated by express permission to His Royal Highness The Prince Consort Chancellor of the University of Cambridge A Collection of Services & Anthems... Subscribers Copy L1.II.6. [Piano-vocal score] 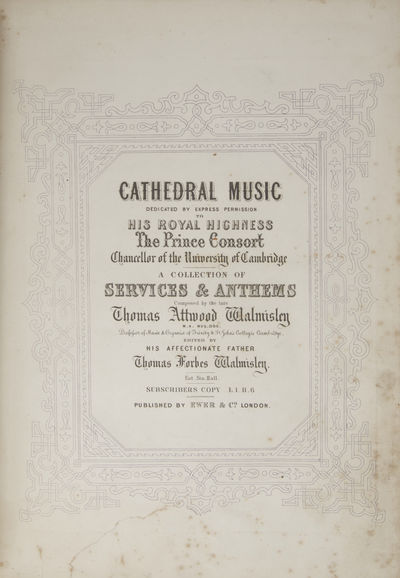 With extensive annotations and performance markings in both pencil and ink including some alterations to music.

Binding worn and scuffed; somewhat stained; spine label cracked and chipped. Slightly foxed; numerous paper repairs; loss of several measures of music to foot of pp. 97/98 and 127/128; occasional minor loss to other leaves. One of 14 copies subscribed to by King's College, Cambridge.

An English composer and organist, Thomas Attwood Walmisley was the eldest son of Thomas Forbes Walmisley. "His early talent led his father to send him to Thomas Attwood, his godfather, for lessons in composition. He was thus in a direct teacher-to-pupil succession from Mozart, who was to be his chief model as a composer... As an organist, Walmisley far surpassed any Cambridge musician of recent memory... As a composer Walmisley, with S.S. Wesley, was responsible for rousing the tradition of cathedrall music from the somnolent condition into which it had sunk during generations of neglect. He brought to it a sense of drama and climax derived from Classical instrumental music, and to a lesser extent from Handel's oratoriois, which made his best church music comparable in colour and interest to the concert hall repertory... Walmisley's masterpiece is generally held to be his Evening Service in D minor (probably 1855), one of the highpoints of English cathedral music." Nicholas Temperley in Grove Music Online. (Inventory #: 29795)
$275.00 add to cart or Buy Direct from
J. & J. Lubrano Music Antiquarians
Share this item