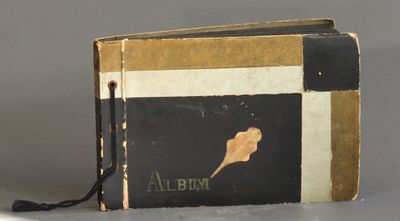 by [Hata, T.]
[Japan, Early 20th c.]. Oblong album containing 157 photographs on 48 pages, dated between 1905-1940, with the majority of the photos taken in the early 1930s. A family album, with both formal and candid photos of a variety of people, including family portraits, association portraits, event photos, household scenes, and images of soldiers. A number of the images have been captioned with dates and the names of individuals or groups depicted. A few locations are also listed, such as Kamisanjimura. Some of the photos, particularly some tourist cards of Mount Koya, appear to be mass produced. The rest are either professional portraits or amateur photography developed through a variety of processes. A nice snapshot of daily life in early Showa Japan, with weddings, children, pictures of photos of the household library and a study desk, the village after a heavy snowfall, etc. The occasional photo has faded but most are clear and in very good condition, in a silver, black and gold album with minor wear. (Inventory #: 50682)
$575.00 add to cart or Buy Direct from
Rulon-Miller Books
Share this item