AUTHORIZATION for PRINTING a "PROCLAMATION for a DAY of THANKSGIVING"; viz., An Official American [Connecticut] Proclamation to Commemorate Thanksgiving 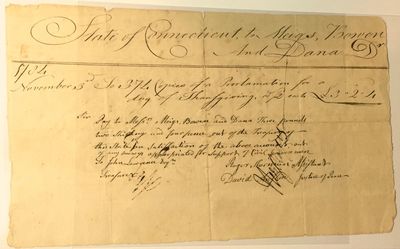 by [SIGNER] Sherman, Roger [Declaration of Independence; Constitution; et al.]
[Connecticut]: State of Connecticut to Messrs. Meigs, Bowen, and Dana, 1784. Original Pay Order. Very Good. Manuscript Document SIGNED by Roger Sherman, bearing the title of "Assistant" [meaning a member of the Upper House of Connecticut, viz., in effect, a State Senator] of Connecticut; one page (12.25" x 7.25"), a Pay Order for Messrs. Meigs, Bowen, and Dana to print "374 copies of a Proclamation for a Day of Thanksgiving,..."; for which authorization was given by Sherman for payment by John Lawrence, Treasurer of Connecticut, to said printers of "3 [pounds], 2 [shillings[, & 4 [pence]." Roger Sherman (April 19, 1721 - July 23, 1793) was not only a SIGNER of the DECLARATION of INDEPENDENCE [July, 1776; being a member of the Committee of Five assigned to draft that document]; he was also the only man to sign all four of the great state papers of the evolving United States, to include the Articles of Association; the Articles of Confederation; and the United States Constitution. Roger was the son of a poor Connecticut farmer who died, thus leaving his 19-year old son with the heavy responsibility of caring for his widowed mother, siblings, and the farm. Apprenticed as a shoe-maker, Roger briefly worked in that trade; then--after a few years--as a merchant with his elder brother, while constantly teaching himself by independent study. Often, he would read a carefully positioned book while cobbling shoes! He conducted his scholarly studies with such intellectual success that--after a few years--he was able to pass the Bar. Thereafter, his rise in position and status was continuous: becoming a practicing attorney and soon judge (for his County from 1759); becoming in the 1760's, the treasurer of Yale University; thereafter sitting on the bench of the Superior Court of Connecticut (1776-1789);more or less concurrently, Mayor of New Haven & a member of the Connecticut legislature; and, from 1774, a distinguished state delegate to the new United States Continental Congress: serving in one or the other house until his death in 1793. "He always appeared exactly what he was--a man of sound common sense; strong natural powers of mind; of deep thought; of much reflection; of deliberate judgment; and a steady integrity--uniformly seeking to promote the cause of righteousness in the most upright manner" (Dwight, p.82). In 1783, his duties for Connecticut and the United States Congress tended to overlap. For both, during this time of strife, he sat on several important committees. For Connecticut, in 1783, he (and Judge Law) were given the legislative task of revising the State Statutes. This Thanksgiving Proclamation appears to be an outgrowth of such efforts. By this relatively late period in American history, the Pilgrim practice of consecrating a Day of Prayer and Thanksgiving in the Fall had spread throughout the Colonies. Accordingly, as the American Revolution and resistance to Great Britain expanded and led to great public anxiety, "Congress issued eight separate national Thanksgiving Proclamations. (Congress also issued seven separate proclamations for times of fasting and prayer, for a total of 15 official prayer proclamations during the American Revolution." (Wikipedia on "Roger Sherman"). A recurrent legislative pattern was that significant state documents were used as templates for Congressional ducuments. While our researches have not found the formal text of this Connecticut Thanksgiving proclamation, we note that Representative Roger Sherman was an active supporter--along with Elias Boudinot--of the Congressional effort to create a national Day of Thanksgiving shortly after the framing of the Bill of Rights (according to the Congressional Record for September 25, 1789). As a result, a joint committee of both houses encouraged President George Washington to "recommend to the people of the United States a Day of Public Thanksgiving and prayer...." "Mr. Roger Sherman justified the practice of thanksgiving on any single event not only as a laudable one in itself but also as warranted by a number of precedents in Holy Writ . . . . This example he thought worthy of a Christian imitation on the present occasion" (Wiki, op. cit.). After the ccngressional resolution was given to President Washington, he concurred enthusiastically, and issued the first Federal Thanksgiving Proclamation, which we quote in part: "Whereas it is the duty of all nations to acknowledge the providence of Almighty God, to obey His will, to be grateful for His benefits, and humbly to implore His protection and favor . . . Now, therefore, I do appoint Thursday, the 26th day of November, 1789 . . . that we may all unite to render unto Him our sincere and humble thanks for His kind care and protection" (Wiki, op. cit.) And so it was intermittently observed in November, until Thanksgiving was further implemented and sanctified by President Abraham Lincoln, who-- in 1863, shortly after the battle of Gettysburg--made Thanksgiving Day a permanent national holiday! Condition: Overall, this important document SIGNED by ROGER SHERMAN, is in Very Good condition. It has light age-toning (or browning) with slight wear, mild soiling & staining, and a few small nicks and abraisions mainly to its edges. Said manuscript has intersecting folds with partial separations and some archival reinforcements to its reverse/verso side. There is a countersignature written across a few letters of Sherman's last name. References: Lewis Henry Boutell, The Life of Roger Sherman, 2015, (ISBN: 978-1505973761), Kindle format. N. Dwight, The Lives of the Signers of the Declaration of Independence, NY: A.S. Barnes & Co., 1852; pp.76-85; note on the meaning of "Assistant" on page 80. Mark David Hall, Roger Sherman and the Creation of the American Republic, Oxford Univ. Press, 2015, (ISBN: 978-0190218706), Kindle format. Huffington Post: http://www.huffingtonpost.com/2013/11/28/thanksgiving-proclamation_n_4078958.html. This article briefly discusses the appearance of George Washington's Thanksgiving Proclamation (signed by him on October 3, 1789) at a Christie's auction in 2013, where it was estimated to fetch somewhere around $8-$12 million dollars, but failed to find a buyer in that range. Wikipedia on "Roger Sherman," accessed in November, 2018. (Inventory #: 374)
$2,950.00 add to cart or Buy Direct from
Borg Antiquarian
Share this item