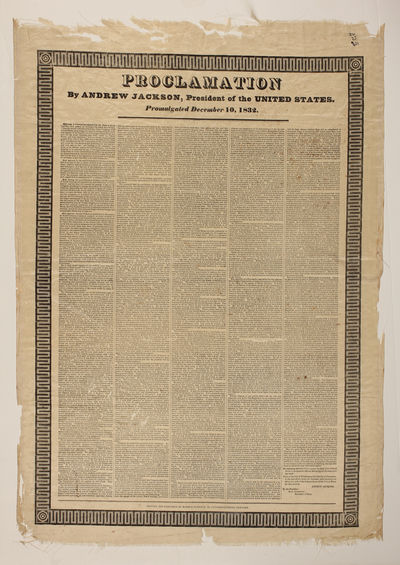 "Whereas, a Convention assembled in the State of South Carolina, have passed an Ordnance...

I consider then the power to annul a law of the United States, assumed by one State, incompatible with the existence of the Union, contradicted expressly by the letter of the Constitution unauthorized by it's spirit, inconsistent with every principle on which it was founded, and destructive of the great object for which it was formed."

The Nullification crisis was a foreshadowing of the sectional divisions that ultimately brought on Civil War. Opposition to protective tariffs enacted by Congress in 1832 grew to such intensity, particularly in the South, that in November 1832, South Carolina adopted a Nullification Ordinance proclaiming the Federal tariffs void in that state as of February 1, 1833.

Jackson's Proclamation, drafted by Secretary of State Edward Livingston but infused with the president's Federalist principles and unyielding resolve, denounced South Carolina's ordnance as treasonous, unconstitutional, and "incompatible with the existence of the Union."

While Congress granted Jackson emergency powers to employ the Army and Navy if necessary, the crisis was narrowly averted. Before the Ordinance of Nullification went into effect, Congress enacted a Compromise Tariff in 1833 that was sponsored by Clay and acceptable to both Jackson and the South. South Carolina promptly rescinded the Ordinance of Nullification, but afterwards, Calhoun and others argued that their actions had been justified and were in accordance with the principles of the Constitution.

The first broadsides of this Proclamation were printed on paper in Washington and followed by several additional printings on silk in such cities as New York, Boston, and Philadelphia.

Fraying and some loss to margins. Minor tears and abrasion to the text area. (Inventory #: 22308)
$2,950.00 add to cart Available from Seth Kaller
Share this item