Andrew Jackson Dockets a Letter on Redecorating the Hermitage, Refusing to Apologize to the French, and Bringing Home Indemnification Money Due from France to America 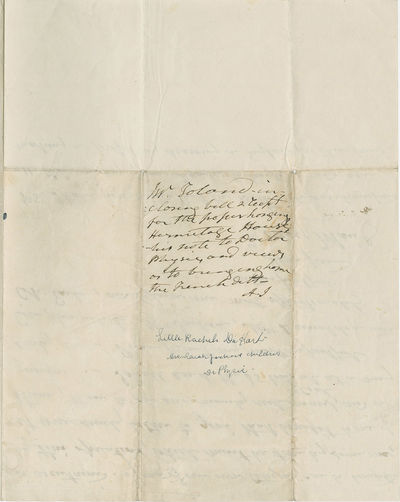 by ANDREW JACKSON
"where no apology is due, you are the very last man on earth to make one…. In the present state of Exchange in this Country, I am sure that 2 to 4 % might be made out of the money instead of paying one half per Cent to Rothschilds to bring it here" (Toland to Jackson) ANDREW JACKSON.
Autograph Endorsement Signed with Initials, ca. June 1835. On HENRY TOLAND, Autograph Letter Signed, to Andrew Jackson, May 29, 1835. 4 pp., 7¾ x 10 in.
Complete Transcript

Mr Toland, inclosing bill & recpt for the paper hanging Hermitage House, his note to Doctor Physic, and views as to bringing home the French debt.

on my return I wrote a note to Dr Physick informing him that Mrs Jackson [Sarah Yorke Jackson, the President's daughter-in-law]
had got safe to Washington, the health of the children, and Your Joint kind messages to him. This produced a regular visit from the Doctor to myself next day, and really he appears to take as much interest in the little Rachael, as if she was his Grand daughter.

He also made the most affectionate inquiries after Mrs Jackson and yourself, and I begged him to pay you a visit for a few days, assuring him how happy you would be to see him. He said he knew of nothing that would afford him so much pleasure, but that with all his efforts he could not get rid of business. That he had a good deal of trouble to get into it when he was a young man, and now that that he was old, he could not with all his efforts, shake it off. Since my return, I called on Mr Golder, and got a Copy of his bill for paper. I paid him the amount, taking a receipt to correct any errors if their be any. The receipt is on the back of the bill, and I have taken a duplicate in my book. We have at length the news of the passage of the bill by the French chambers which is very well, but where no apology is due, you are the very last man on earth to make one. I hope however, that every thing will be arranged as you may think proper, and when it is done, you will remember our friend Major Lewis. In the present state of Exchange in this Country, I am sure that 2 to 4 % might be made out of the money instead of paying one half per Cent to Rothschilds to bring it here

I am preparing all these calculations, and in the mean time it would be well to prevent any arrangement, until the most profitable mode is ascertained. If one of our own Citizens can be benefitted by this operation, which must be done by some one, it were surely better to give that benefit to one of them, than to an enormously rich man, and a foreigner. I shall send the 6t tons of coal at at a very early day. Please present my most respectful Compliments to Mrs Jackson, Mrs Donaldson and Col Earle, and believe me most affectionately and respectfully

P.S. I have ascertained that the B[ank of the]. U. States have transferred all their money from France to England, and are making a profit by drawing on England for their funds.

The letter also details some business related to decorating at the Hermitage, Jackson's home near Nashville, Tennessee. A chimney fire in the fall of 1834 causes serious damage to the house, and Jackson rebuilt the mansion over the next two years. Robert Golder, a dealer in Philadelphia, provided scenic wallpaper for the Hermitage to replace that damaged by the fire. The wallpaper illustrates the classical Greek story of Telemachus.

In 1806, Emperor Napoleon imposed the Continental System as a naval blockade against the European import of British goods or export to the United Kingdom. Over the next several years, Napoleon's forces seized more than three hundred American vessels and their cargoes, valued at over $7 million. Franco-American relations deteriorated, but the United States was the largest importer of French products, while France was America's second largest market for exports. From 1829 to 1831, William Rives negotiated a treaty to settle American claims. The French agreed to pay $4.6 million in six equal installments, but did not make the first payment when it came due in February 1832. A furious Jackson sent former Secretary of State Edward Livingston as minister to France aboard a warship. The Chamber of Deputies considered the matter in April 1834, and narrowly disapproved the payments. In his annual message in December 1834, Jackson condemned the French government for failing to fulfill the treaty and asked for congressional approval to confiscate French ships and property. The French government recalled its minister, but the Chamber of Deputies approved the payments on April 15, 1835. However, the Chamber attached an amendment requiring Jackson to "explain" his December 1834 annual message before any indemnification would be made. Jackson responded bluntly: "no apology." In his seventh annual message to Congress in December 1835, Jackson declared that he never intended to threaten or insult France, but insisted he would defend American independence and sovereignty. Later, the British offered to mediate the dispute and convinced the French that Jackson's latter message to Congress served as the "explanation" they had demanded. On February 15, 1836, the British informed the United States that the French would pay the first installment when requested.

The "Major Lewis," whom Toland urged Jackson to remember, was William B. Lewis
(1784-1866), who had served as quartermaster under General Andrew Jackson. In April 1835, Lewis wrote to Jackson requesting appointment as a special envoy to France to oversee the payment of the indemnity. His reasons were blatantly self-serving, "it is a job that will be worth something handsome to the person who transacts the business; and I should like myself to get whatever is allowed for the operation…. I can do the business just as well, and as safe as Mr. Wells, and why should he be permitted to line his pockets in preference to one of your old friends?" Ultimately, Jackson left the decision to his Secretary of the Treasury Roger B. Taney, and Gideon Welles got the job. Later, Jackson appointed Lewis as second auditor of the Treasury, a position he held until the Polk administration.

Henry Toland (1785-1863) was a wealthy Philadelphia merchant and a director of the Bank of the United States. He was a close personal and political friend of, as well as a business agent for, Andrew Jackson. In 1832, President Jackson appointed Toland to investigate the condition of the Bank of the United States, and Toland served as an agent for Jackson in the purchase of furniture for the Hermitage, Jackson's plantation near Nashville, Tennessee.

Sarah Yorke Jackson (1803-1887) married Andrew Jackson Jr. in 1831 in Philadelphia and lived in the White House for an extended honeymoon. The new couple then moved to the Hermitage, where he managed the plantation until a fire destroyed much of the main house in 1834. They then returned to live with Jackson in the White House, where she served as a hostess for her widowed father-in-law from 1834 to 1837, while her husband was his secretary. (Inventory #: 24588.04)
$2,200.00 add to cart Available from Seth Kaller
Share this item