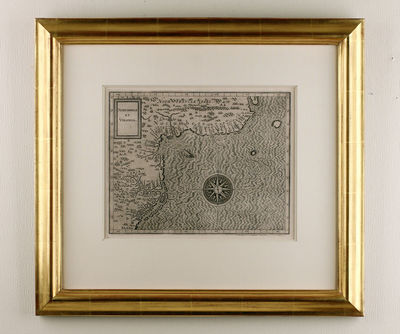 by CORNELIS VAN WYTFLIET
Taken from the first atlas devoted entirely to America, this is only the second map to use 'Virginia' in its title, after the White-De Bry of 1590 [AL 09], on which this is partly derived. Despite major inaccuracies - such as the labeling of the Chesapeake's latitude near present-day Maine, and the depiction of the mythical city of Norumbega - this map was the most accurate map of the east coast until de Laet (1630). CORNELIS VAN WYTFLIET.
Norvmbega et Virginia. 1607, Second state. 9 x 11 ½".
Showing the east coast of North America from the Outer Banks of Carolina to Canada, Wytfliet's map was created "at a period just before a number of English voyages to explore and settle the coast. Along with the Dutch voyages, these would help to chart one of the last remaining poorly known coastal parts of the Atlantic, that between Virginia and Nova Scotia. No Long Island or Hudson River are shown. Because of the already notoriously dangerous Carolina Outer Banks and the rocky waters around New England and Cape Cod, a wide berth and direct course was often taken which kept vessels well away from these waters". (Burden) Second state with date "1597" removed but latitude mark reading "30" instead of "39" at left side.

"The name Virginia did not apply to the state or to the Jamestown Colony. Rather it applied at the time to all Atlantic coastal area as England might claim or hold. The map adds no information to the Chesapeake area from what White gave, but like Jode in 1593, it places the entrance to the bay far to the north where Maine is today." (Verner)

"The origin of the name Norumbega is controversial. The term apparently was an Indian name for a river. Jacques Cartier in 1534 brought back from the Montreal area what he thought were diamonds, later found to be worthless crystals. This may have contributed to the idea of Norumbega as a rich realm worth finding. Mercator in 1569 showed Norumbega as a place of importance as a fortified capital bristling with towers, near the Bay of Fundy. From 1604 to 1607, Champlain searched the northern coasts for Norumbega, without success. His map of 1612 gave that name to an insignificant Indian village at the mouth of the Penobscot and thereon the name began dropping off the map." (MSA) (Inventory #: 21001.99)
$4,800.00 add to cart Available from Seth Kaller
Share this item