Alexander Hamilton Writes a Female Friend in Puerto Rico, Sympathizing with the Perilous Condition of Haiti as French Control of the Island Deteriorates 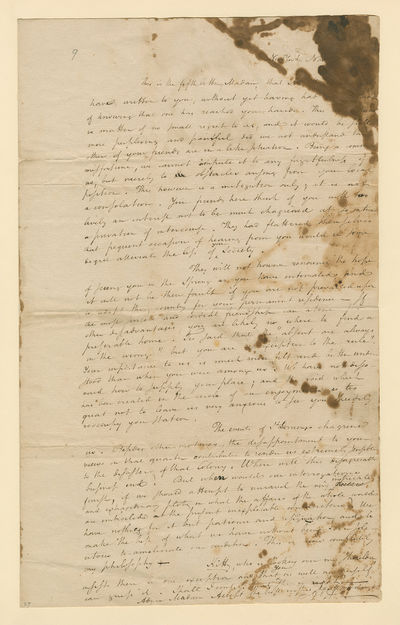 by ALEXANDER HAMILTON
"The events of St Domingo chagrine us… [T]he disappointment to your views in that quarter contributes to render us extremely sensible to the disasters of that Colony. When will this disagreeable business end? But when would our interrogations finish, if we should attempt to unravel the very intricate and extraordinary plots in which the affairs of the whole world are embroiled at the present inexplicable conjuncture? We have nothing for it but patience and resignation, and to make the best of what we have without being over solicitous to ameliorate our conditions. This is now completely my philosophy." ALEXANDER HAMILTON.
Autograph Letter Signed with Initials, to Marie Jeanne Ledoux Caradeux de la Caye, Countess of Caradeux. November 1802. New York City. 1 p., 7¾ x 12⅝ in. Several words obscured by ink stain.

Inspired by the French Revolution, the Haitian Revolution began in 1791 when the slaves of the French colony of Saint Domingue (modern Haiti) revolted, killed 4,000 whites, and destroyed more than a thousand plantations. By 1792, they controlled a third of the island, and many whites, including the Caradeux, fled.

Hoping to take advantage of the unrest to seize a valuable colony, Spain, which controlled the rest of the island of Hispaniola, and Great Britain invaded. Both Great Britain and Spain supplied the rebels with food and arms. However, they also restored slavery wherever they went, so the majority of Haitians hated them. In response, French commissioners freed the slaves of Saint Domingue, and the National Convention confirmed their action. François-Dominique Toussaint Louverture, a self-educated former domestic slave, joined the Spanish army in opposition to the French planters. In 1794, however, Toussaint Louverture suddenly joined the French and expelled the Spanish from Saint Domingue. He urged the surviving French whites to stay and help him rebuild Saint Domingue. Most of the British army was killed by yellow fever, and they finally withdrew in 1798.

By 1800, when Toussaint captured Jacmel, and the French mulatto commander André Rigaud fled, Toussaint effectively ruled Saint Domingue as a dictator. He then led an invasion of Santo Domingo, the Spanish portion of the island of Hispaniola, and freed the slaves there in January 1801. At this time, although he did not sever his ties with France, Toussaint was the de facto ruler of the entire island of Hispaniola. In 1801, he issued a constitution declaring himself governor for life and called for a sovereign black state. In response, Napoleon Bonaparte sent a French force, led by his brother-in-law Charles Leclerc, to reassert French rule and to restore slavery. Leclerc landed at Le Cap in February 1802 and attempted to lure Toussaint to him. When that failed, he declared Toussaint to be an outlaw and rebel.

Leclerc divided his forces into four columns, one of which was commanded by General Donatien de Rochambeau, a white supremacist and supporter of slavery who hated the Haitians. At a narrow ravine in the mountains, Toussaint attempted to stop Rochambeau's column, but the French prevailed with heavy losses after hours of brutal combat. A Haitian army in the fort of Crête-à-Pierrot, under the command of Jean-Jacques Dessalines, successfully repulsed repeated French assaults until they were forced to withdraw because of lack of supplies. The arrival of the rainy season brought yellow fever, which killed thousands of French troops.

In April 1802, Haitian commander Henri Christophe defected with much of his army to the French. Two weeks later, Toussaint agreed to integrate his remaining troops into the French army in exchange for his freedom. He was later seized by the French and sent to France, where he died in prison in April 1803.

Resistance continued in the countryside, and the French army employed mass executions, including gassing in the holds of ships, an invention of General Rochambeau. As it became clear that the French intended to re-establish slavery, despite their promises to the contrary, some Haitian leaders like Dessalines who had allied with France rejoined the opposition to French rule. In November 1802, Leclerc died of yellow fever, as had thousands of the men in his army, and Rochambeau succeeded him. Rochambeau began a near-genocide, importing attack dogs from Jamaica, trained to attack blacks and mulattoes. Napoleon sent 20,000 soldiers to reinforce Rochambeau, and the war continued with cruelty and atrocities on both sides. In 1803, facing renewed war with the British, Napoleon no longer reinforced Rochambeau, and the British navy blockaded the remaining French enclaves in Haiti. The French abandoned Port-au-Prince in October 1803, and concentrated at Le Cap. In November 1803, Dessalines attacked Le Cap, and Rochambeau surrendered to the British commander.

On January 1, 1804, Dessalines declared Saint Domingue's independence and renamed it Haiti. From January to April, Dessalines' forces massacred an additional 3,000 to 5,000 white men, women, and children. Under Dessalines' rule, much of Haiti returned to slavery under another name, until Dessalines was assassinated in 1806 and replaced by Henri Christophe, who committed suicide in 1820. Christophe's son and heir was assassinated, and General Jean-Pierre Boyer assumed power. Boyer reunited Haiti and annexed Santo Domingo, bringing the entire island under one government by 1822. France acknowledged the independence of Haiti in 1825.

Hamilton wrote this letter in November 1802 without knowing if she would receive it. When Madame Caradeux de la Caye wrote a letter (in French) to Hamilton on March 6, 1803, from Puerto Rico, she had received only one letter from him, though she had written him at least ten. "I am more than ever persuaded now," she wrote, "that St. Domingo is entirely lost for this generation, and that I will have nothing of my fortune." She was resigned to living the rest of her life in Puerto Rico, and told Hamilton, "you would not recognize my Character, I'm as sad as you've known me gay.... How I miss America, sir!"

The phrase "the absent are always in the wrong" is a line from L'Obstacle Imprévu, a 1717 comedic play by French playwright Philippe Néricault Destouches (1680-1754). The phrase also appears in philosopher Jean-Jacques Rousseau's Emile, or On Education (1762).

Marie Jeanne Ledoux Caradeux de la Caye, Countess of Caradeux
(b. 1756) was born in Croix-des-Bouquets, Haiti, and in 1777 married Laurent de Caradeux de la Caye, Count of Caradeux (1752- ca. 1822), a French sugar planter and member of the colonial assembly who owned a plantation near Port-au-Prince in Santo Domingo. He was the brother of Jean-Baptiste Caradeux "the cruel" (1741-1810). During a slave revolt in 1792, Laurent de Caradeux de la Caye fled with fifty slaves and settled near Charleston, South Carolina. In 1799, Haitian leader Toussaint invited French colonists to return, and Caradeux received a passport from the U.S. State Department in August 1799. After the Haitian Revolution of 1802-3, the Count of Caradeux settled in Puerto Rico, where the Countess had been since 1800. In 1820, she still lived in Mayagüez, Puerto Rico. She became a naturalized citizen of Spanish Puerto Rico in April 1829.

This is the fifth letter, Madam, that Mrs. H [and myself] have written to you, without yet having had [the satisfaction] of knowing that one has reached your hands. This [circumstance]
is matter of no small regret to us, and it would be still more perplexing and painful did we not understand that others of your friends are in a like situation. Being a common misfortune, we cannot impute it to any forgetfulness of us, but merely to obstacles arising from your local position. This however is a mitigation only; it is not a consolation. Your friends here think of you with too lively an interest not to be much chagrined at so entire a privation of intercourse. They had flattered themselves that frequent occasions of hearing from you would in some degree alleviate the loss of your Society.

They will not however renounce the hope of seeing you in the Spring as you have intimated; and it will not be their fault if you are not prevailed upon to adopt this country for your permanent residence. If the most sincere and cordial friendship can atone for other disadvantages, you are likely no where to find a preferable home. Tis said that the "absent are always in the wrong" but you are an "exception to the rule." Your importance to us is much more felt and better understood than when you were among us. We have not discovered how to supply your place; and the void which has been created in the circle of our enjoyments is too great not to leave us very anxious to see you speedily reoccupy your station.

The events of St Domingo chagrine us. Besides other motives, the disappointment to your views in that quarter contributes to render us extremely sensible to the disasters of that Colony. When will this disagreeable business end? But when would our interrogations finish, if we should attempt to unravel the very intricate and extraordinary plots in which the affairs of the whole world are embroiled at the present inexplicable conjuncture? We have nothing for it but patience and resignation, and to make the best of what we have without being over solicitous to ameliorate our conditions. This is now completely my philosophy.

Kitty, who is looking over my shoulder, insists there is one exception and that you as well as herself can guess it. Shall I confess that she is right?

Adieu Madam Accept the best wishes of Mrs. H & myself