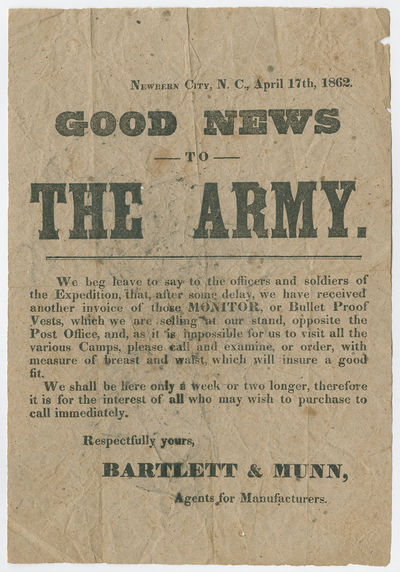 by CIVIL WAR
A remarkable broadside advertising the sale of bulletproof vests to Union forces in North Carolina in the wake of the occupation of much of coastal North Carolina by General Ambrose Burnside's Expeditionary Force. [CIVIL WAR].
Broadside. "Good News to the Army." Bartlett & Munn, Agents for Manufacturers. Newbern, N.C., April 17, 1862. 1 p., 9¾ x 6 ½ in.
"We beg leave to say to the officers and soldiers of the Expedition, that after some delay we have received another invoice of those Monitor, or Bullet Proof Vests, which we are selling at our stand, opposite the Post Office, and as it is impossible for us to visit all the various Camps, please call and examine, or order, with measure of breast and waist, which will insure a good fit. We shall be here only a week or two longer, therefore it is for the interest of all who may wish to purchase to call immediately..."

Several firms attempted to sell such bullet proof vests during the war, with ads for body armor even appearing in Harper's Weekly. According to historian Byron Farwell, "G. & D. Cook & Company of New Haven, Connecticut, offered to Union soldiers a 'soldier's bullet proof vest' in two models, a seven-dollar model for officers and a five-dollar one for enlisted men, and for a time early in the war the Atwater Armor Company also in New Haven, produced two hundred per day. Although they were nonregulation in both Civil War armies, a few volunteer regiments were quipped with them. They proved too heavy to be practical, and the increased efficiency of weapons destroyed any value they may have had."

It is not known which company "Bartlett & Munn" represented. Advertising to Ambrose Burnside's troops, who had occupied New Bern, N.C. on March 14, 1862, they name their vests "Monitors," in obvious reference to the Union ironclad who had stood toe to toe with C.S.S. Virginia in the Battle of Hampton Roads on March 8-9, 1862. (Inventory #: 21777)
$4,500.00 add to cart Available from Seth Kaller
Share this item