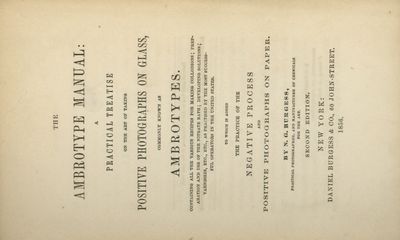 by Burgess, N. [Nathan] G.
New York: Daniel Burgess & Co, 1856. Second edition. 12mo., 184 pp., plus 3 adverts. Blind-stamped cloth, which is faded, with wear at the corners; the crown of the spine is chipped, and the front hinge is partially cracked at the title page but holding. Signature of the original owner on the blank front free endpaper, with modest toning to the front and rear blanks. Very good. Little is known of the early years of Nathan G. Burgess before he came to photography. According to Marcus A. Root, in his THE CAMERA AND THE PENCIL p.390, Burgess, on a visit to Paris in 1840, learned the daguerreian process "with one of the artisans, who had taken part in constructing Daguerre's first sun-painting apparatus", either from Michel Chevreul or Alphonse Giroux. By 1844, Burgess had a thriving portrait gallery at 192 Broadway in New York City, and a branch in Charleston, South Carolina. His AMBROTYPE MANUAL was first published in 1856, and quickly sold out, requiring a second edition only months later. Additional editions, with revisions and differing titles followed. His career seems to have ended in 1862. This manual presents detailed instructions and formulae and includes information regarding apparatus, the darkroom, collodion (wet and dry) processes, gelatin emulsions, platinum, carbon, etc. This second edition of his manual includes the newly created, Pearl ambrotype process. Roosens and Salu No. 241a - the first manual on the ambrotype process. (Inventory #: 52570)
$800.00 add to cart or Buy Direct from
Andrew Cahan: Bookseller
Share this item
Andrew Cahan: Bookseller, Ltd.
Offered by

[Augusta, Maine] : Entered according to Act of Congress in the year 18[5]9 by Scofield Leavit in the Supreme Court of Maine , 1859
(click for more details about INSTRUCTIONS FOR ROMAN CHRYSTALLOTYPE PAINTING, TAUGHT BY JOHN M. DONAHOE)

London : John Murray , 1847
(click for more details about ENGLISH ETYMOLOGIES)
View all from this seller>