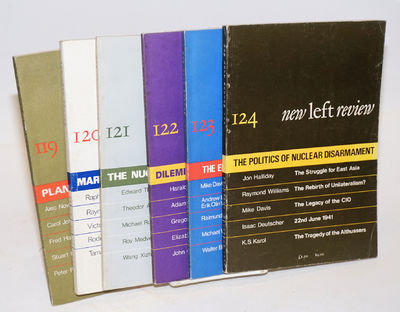 by Anderson, Perry, ed
London, England: New Left Review, 1980. Six issues, complete run for 1980. All are 6x9 inches, in very good condition. The New Left Review (NLR) was founded in 1960 in the England after the editors of the New Reasoner and the Universities and Left Review combined boards. NLR aspired to work towards the reestablishment of socialism as a viable force in English working-class politics. The journal was initially edited by Stuart Hall, who was replaced in 1962 by Perry Anderson, who expanded NLR's focus to Western Marxism. Robin Blackburn took over from Anderson in 1982 and continued until a redesign and relaunch in 2000 when Perry Anderson resumed the editorship. Some of the articles in this 1980 run include Soviet Economic Prospects by Alec Nove, War in Afghanistan by by Fred Halliday, The Legacy of Nicos Poulanzas by Stuart Hall, Reflections on Bahro by Raymond Williams, Blood of Spain by Victor Kiernan, The Logic of Extremism by Edward Thompson, A Marxist Metaphysician by Theodor Adorno, The Electoral Impasse by Adam Przeworski, Labour in American Politics by Mike Davis, and many more. (Inventory #: 107771)
$50.00 add to cart or Buy Direct from Bolerium Books
Share this item