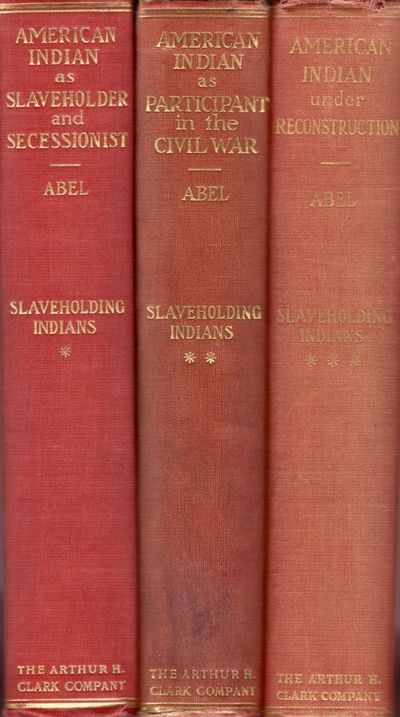 by Abel, Annie Heloise (Ph.D.)
Cleveland: The Arthur H. Clark Company, 1925. First Edition. Hardcover. Good +. Quartos. 3 volumes: [1], 394 pages, [1]; 403 pages; 419 pages. All volumes illustrated. Red cloth hardcovers with gilt titles on the spines. Gilt top edges. Untrimmed foredges. Volume 1 has a thin, light dried water stain on the front cover and a small dried water stain at the top edge of the text block. A few pages in front of volume 1, including the title page, have dried water stains at the top edge. Cloth spine on volume 3 is light faded. Bindings are very sturdy and contents are very clean with the exception of the few pages mentioned in volume 1. Frontispiece map of volume 1 shows how the Indian Territory appeared in 1861. This comprehensive study took a decade to complete with fewer copies of volume 3 printed. Although this set is widely held in institutions it is scarce in the trade.

Howes A 9. From wikipedia: Annie Heloise Abel was one of the first thirty women in the United States to earn a Ph.D. in history. One of the ablest historians of her day, she was an acknowledged expert on the history of British and American policy toward natives. As another historian has put it: "She was the first academically trained historian in the United States to consider the development of Indian-white relations and, although her focus was narrowly political and her methodology almost entirely archival-based, in this she was a pioneer." Historians consider her most important work to be the three-volume The Slave Holding Indians. (Inventory #: 12972)
$2,000.00 add to cart or Buy Direct from Americana Books
Share this item

Memorial Services Held in the House of Representatives of the United States, Together with Remarks Presented in Eulogy of Leslie J. Steele Late A Representative From Georgia

Washington DC : Government Printing Office , 1920
(click for more details about Memorial Services Held in the House of Representatives of the United States, Together with Remarks Presented in Eulogy of Leslie J. Steele Late A Representative From Georgia)