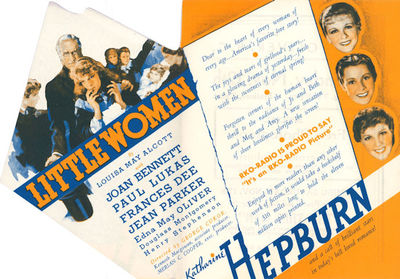 by [Alcott, Louisa May (sourcework)]
[Cincinnati]: [Printed by Hennegan for:] RKO Radio Pictures, 1933. [4]pp. Color pictorial folding herald (17 x 13.5 cm folded). About fine. An uncommon and striking pictorial herald for the 1933 film adaptation of LITTLE WOMEN, produced by Merian C. Cooper. directed by George Cukor, starring Katharine Hepburn, Joan Bennett, Edna May Oliver, et al, based on a screenplay by Sarah Mason, Victor Heerman and a stable of uncredited script doctors. The upper panel is diecut in the form of an illustration of the original Roberts Bros. edition of the novel, which folds back to reveal the details. The rear panel is imprinted for a showing at a theatre in Oliver, British Columbia, to be followed in a few days by THE THIN MAN. (Inventory #: WRCLIT79717)
$75.00 add to cart or Buy Direct from
William Reese Co. - Literature
Share this item

[New York] : Adventures in Poetry , 1973
(click for more details about SUITE V.)
View all from this seller>