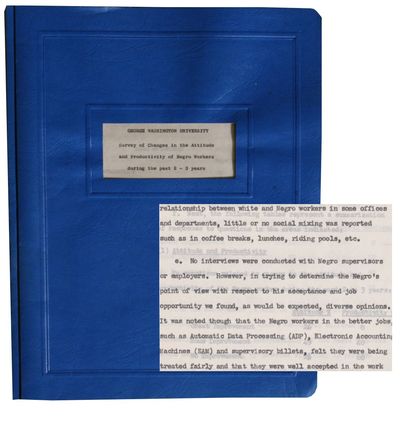 by Delemarre, Robert and Stearns, T. H.
[washington, D. C. ], 1964. 11½" x 9". Blue, plastic-coated paper, three prong folder. Title leaf + contents leaf followed by 18 leaves of typescript printed rectos only, approximately 2200 words. Very good plus: spot of soiling to title leaf, first several leaves unevenly cut at top; a few penciled annotations in the text and some scattered stray marks not affecting readability. In March 1961, President Kennedy signed an executive order banning federal government contractors from discrimination based on race. The order also created the President's Committee on Equal Employment Opportunity. Kennedy hoped that the PCEEO's enforcement powers would "end job discrimination once and for all." This paper that appears to be for a graduate level class at George Washington University sought to study the effect of the order. The students interviewed and provided questionnaires to 40 managers (20 government contractors, the rest private industry) regarding their thoughts on the order's effect. They also asked questions related to the attitudes and productivity of black workers, the acceptance of black workers by white workers and more. Some of the findings included the belief that African American workers would receive equal pay, but not equal status, by the year 2000; "unskilled Negro workers tend to be malcontents"; and "while the Negro workers' attitude has improved appreciably, his productivity has lagged materially. " The last five leaves are a sample of the questionnaire. Excellent primary source material of a previously unknown study on the progress of equal employment for African Americans. This item is offered by Langdon Manor Books, LLC, antiquarian booksellers. Please do not hesitate to contact us for additional information and/or photos and we will respond promptly. We package our items carefully, ship daily, and have a no hassle returns policy--your satisfaction is guaranteed. We are members of the Antiquarian Booksellers' Association of America (ABAA) , the International League of Antiquarian Booksllers (ILAB) and the Independent Online Booksellers Association (IOBA) and adhere to their rules of ethics. (Inventory #: 1506)
$500.00 add to cart or Buy Direct from
Langdon Manor Books
Share this item