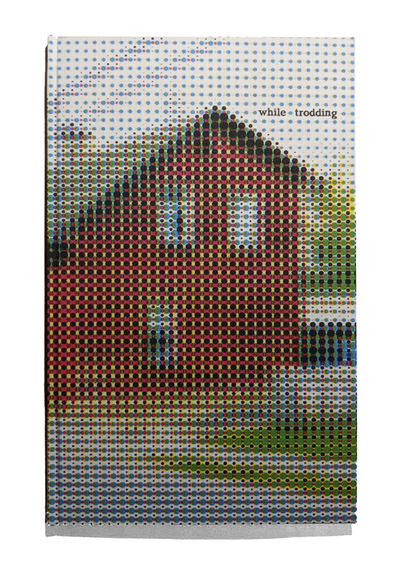 by Meador, Clifton.
Boone, North Carolina:: Clifton Meador,, 2016.. Edition of 30. 10.25 x 6.5"; 36 pages. Printed in four-color risography in non-standard process color by Jason Wright during the fall of 2016 and spring of 2017. Case-bound in a digitally-printed cotton cloth. Signed and numbered by the artist. Clifton Meador: "During a residency at the Truukimuseuum (a printing history museum) in Tartu, Estonia during the summer of 2016, I became interested in the narratives embedded in Soviet-period photo books. Many of these books seemed to embody cold war narratives of surveillance and paranoia, hidden in banal images of everyday tourist sites. I re-photographed several of these books which have become other projects on their own.  "But one book in particular, a friendly tourist book from the period of the Soviet occupation of Estonia (first from1940 to 41, then from 1944 to 1991), Osvald Tooming's Matkates Mööda Kodumaad, 1964 (Hiking Through the Homeland), was full of captions that suggested readings other than simple observations of Estonia. I edited fragments of these captions and I set out to make my own guidebook of the walk from my apartment in Tartu to the train station, printed in such a way as to make the images as nearly unrecognizable as possible." (Inventory #: 22674)
$110.00 add to cart Available from Vamp & Tramp
Share this item

by [Quite Contrary Press] Mary Marsh.