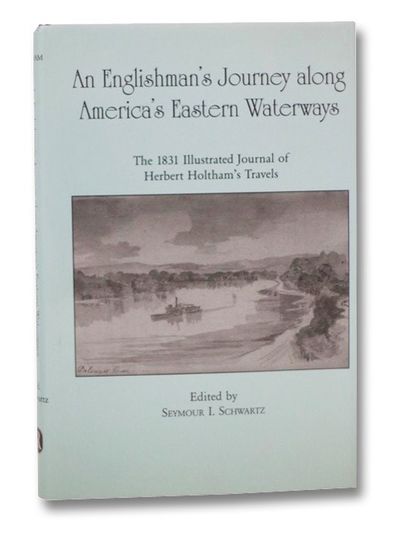 by Holtham, Herbert; Schwartz, Seymour I
Rochester Museum & Science Center / University of Rochester Press, 2000. First Edition. Hard Cover. Near Fine/Near Fine. First edition. Near fine. 2000 Hard Cover. xv, 168 pp. "Herbert Holtham, a Unitarian minister from Brighton, England, came to the United States in the spring of 1831, and spent several months traveling in the northeast. His travels took him from New York, where his ship landed, to Philadelphia, eastern Pennsylvania, then back to New York, up the Hudson River to Albany, across the entire state on the six-year-old Erie Canal. He stopped in Utica, Rochester, and Buffalo, noting the rapid growth of these cities, especially Rochester, that had occurred in the few years the canal had been open. From Buffalo he crossed into Canada, traveling east along Lake Ontario, past Toronto [then called York] to Ottawa and Montreal; he returned through Lake Champlain to Albany and New York, and continued south to Baltimore and Washington, returning to Philadelphia once again in order to set sail for England. Holtham recorded his impressions of both urban and rural scenes, the people and their opinions, family life, church life and activities, and reports of many conversations he had while traveling. The journal of his travels provides a superior set of impressions of America at the time from a man who brought his skills of perception to the transcription. Beyond the words, the journal contains thirty marvelous pencil and ink drawings of what he saw; scenes of Niagara Falls and downtown Rochester accompany paintings of the Capitol in Washington, a carriage operated by the Baltimore and Ohio Railroad, and Independence Hall in Philadelphia. (Inventory #: 2265042)
$20.00 add to cart or Buy Direct from
Yesterday's Muse
Share this item
Yesterday's Muse, Inc.
Offered by