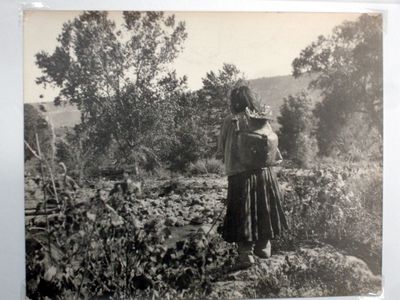 by Moon, Carl
(8 cm x 10.5 cm). Untitled Photograph. Carl Moon Photograph of an Indian woman with a large jar on her back standing by a small creek. No title or stamp. (25.1 cm x 20 cm) Carl E. Moon (originally spelled Karl) moved to Albuquerque, New Mexico in 1903, where he set up a photography studio and began making "art studies" of the Native Americans of the Southwest, both in photographs and in oil paintings, sometimes living for weeks at a time in Navajo villages. His photographs began appearing in magazines and he exhibited at the Museum of Natural History in New York. In 1907, Moon signed a contract with the Fred Harvey Company to produce photographs for what would be the Fred Harvey Collection of Southwest Indian Pictures. For seven years, from 1907 to 1914, Moon photographed the native people of the Southwest, in his studio and in their villages. His images appeared (often uncredited) in brochures and publications for both companies. Moon resigned from Fred Harvey Co. in 1914, and he and his second wife, Grace, moved to Pasadena, California, where he continued to work as a photographer and painter. In 1924, Moon began work on "Indians of the Southwest," a set of 100 of his finest prints. Published in 1936, only ten copies were ever produced. With his wife Grace, he also wrote and illustrated many children's books about the Indians of the Southwest. (Inventory #: 021457)
$700.00 add to cart or Buy Direct from
ALCUIN BOOKS, ABAA
Share this item

Driving Your Own Car in Germany

The Legend of Bagger Vance, Inscribed with Author's Handwritten Quote from Book

New York; (1995) : William Morrow and Co
(click for more details about The Legend of Bagger Vance, Inscribed with Author's Handwritten Quote from Book)
View all from this seller>