The Siege and Fall of Port Arthur 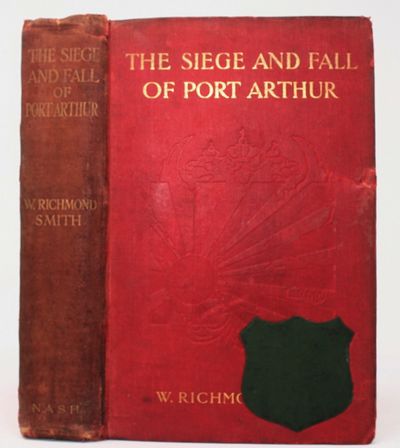 by Smith, W. Richmond; Nicholson, W.G. (Preface)
London: Eveleigh Nash, 1905. First Edition. Hardcover. xxii, 478 pp + illustrations from photographs and 2 folding maps. A well worn but complete and intact copy of a scarce book. Ex-library, with related markings; general soiling and wear; scattered foxing. Fair to good overall. Wiki: "The Siege of Port Arthur, the deep-water port and Russian naval base at the tip of the Liaodong Peninsula in Manchuria, was the longest and most violent land battle of the Russo-Japanese War....[It] saw the introduction of much technology used in subsequent wars of the 20th century (particularly in World War I) including massive 28 cm howitzers capable of hurling 478-poun) shells over 5 miles, as well as rapid-firing light howitzers, Maxim machine guns, bolt-action magazine rifles, barbed wire entanglements, electric fences, arc lamp searchlights, tactical radio signalling (and, in response, the first military use of radio jamming), hand grenades, extensive trench warfare, and the use of modified naval mines as land weapons." The author was a war correspondent for AP and Reuters stationed with the Third Imperial Japanese Army. (Inventory #: 2986)
$300.00 add to cart or Buy Direct from Walkabout Books
Share this item

Report of the Botanist, Dr. Geo Vasey for the Year 1888, with Illustrations