ADDRESS OF THE LOUISIANA DEMOCRATIC ASSOCIATION, TO THE PEOPLE OF LOUISIANA 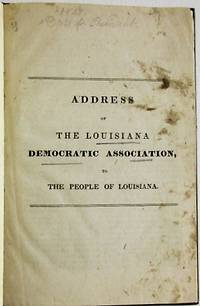 by Democratic Association of Louisiana
[New Orleans? Baton Rouge?, 1848. 16pp. Upper blank forecorners of most leaves chipped [no text affected]. Good+ in later cloth with gilt-lettered spine title. The place of publication of this rare pamphlet is undetermined. Neither the Historic New Orleans Collection nor Yale-- the only two locations listed by OCLC-- has suggested one; Jumonville and Thompson do not record it, although Baton Rouge or New Orleans seems likely. The Association urges the presidential election of Democrat Lewis Cass, recalling the Nation's four years of progress-- including the Mexican War-- under Democratic stewardship. "To the Democratic party alone belongs the proud satisfaction of remembering that these glorious events have occurred during the administration of the President of their choice." With a backhanded compliment to General Taylor, Louisiana's native son and Cass's Whig opponent, "appreciation" is expressed for America's "illustrious Generals." But "this glorious war has been directed, prompted and controlled by a Democratic administration." Whig policies are denounced, particularly Whigs' wrongheaded opposition to the annexation of Texas. Taylor has "an attitude of hostility to the rights of the South." He is committed "irrevocably to that odious measure, the Wilmot Proviso, or rather, we should style it, the anti-South Proviso." Taylor's running mate, Millard Fillmore, has similar "abolition sentiments." 113 Eberstadt 293. OCLC 24573675 [1- HNOC], 702665231 [1- Yale] as of February 2018. Not in Jumonville, Thompson, Sabin, LCP, or AAS's online site. (Inventory #: 34685)
$850.00 add to cart or Buy Direct from
David M. Lesser, Fine Antiquarian
Share this item
David M. Lesser, Fine Antiquarian Books LLC
Offered by