The Jockey Club, or a Sketch of the Manners of the Age 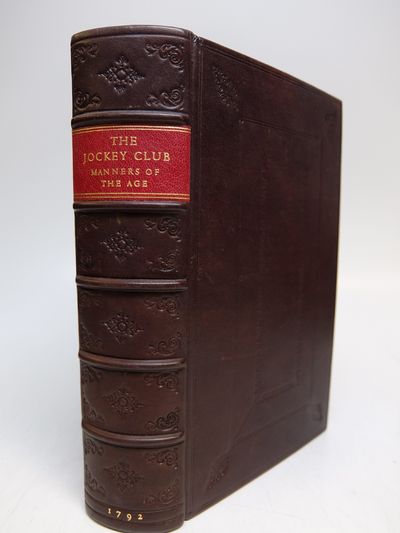 by PIGOTT, Charles
London: Symonds, 1792. hardcover. near fine. Part I (14), 194pp: 12th edition. 1792; Part II (30), 191pp: 10th edition. 1792; Part III 233 pages, 3rd edition, 1793. Three parts handsomely bound together in blind stamped brown calf with a red leather spine label. London: Printed for H.D. Symonds, 1792-3. Near fine with a small tipped in newspaper picture of a Rowlandson cartoon that has browned with age and darkened the pages it lies between. A very popular collection of gossip about, and invective toward, the elite of the 18th century. "Charles Pigott (d. 1794), radical and satirist, was also an ardent champion of the French Revolution. He issued, anonymously, the popular satire, offered a scurrilous account of Ã©lite London society, with which he seems to have been well acquainted" ODNB. (Inventory #: 282996)
$750.00 add to cart or Buy Direct from
Argosy Book Store
Share this item