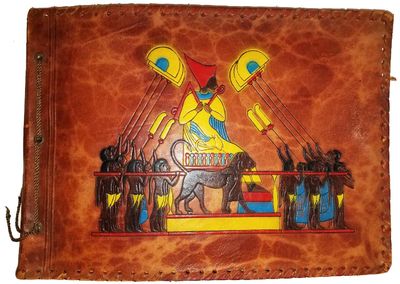 Here offered the extensive archive of Ruth Rodger, a young Monmouth County, New Jersey woman who volunteered to serve in the Red Cross in India during World War II.Â  The archive consists of hundreds of vernacular photographs of her, her life in the Red Cross and her life in India.Â  There are also numerous papers related to her life overseas, letters from the 1940s, and a few family papers, including:
Â
- Hundreds of photographs, primarily black and white, with some negative and of various sizes.Â  Some housed in a photograph album with an Egyptian motif on the front, and the rest are generally loose, although a few envelopes contain images and are labeled, such as âMaharajahâs Palace.âÂ  A sizeable percentage of the photographs are marked on the verso, such as an image of buildings and a tennis court with the notation âTennis Courts & Squash!Â  Where âPeachâ & John lived Oh! Those snow caps!Â  Mussorie-India, Apr 45â.Â  The subject of the photographs is extensive; for example, there are images of men carrying coal in baskets on their backs, street scenes of [presumably] Calcutta, other American GIs and women, photographs of her, dances and big band concerts, the officers club, playing horseshoes, self-created entertainment on stage, group photographs, Indian officials, the Taj Mahal and much additonal.Â  There are also images of a USO show and one shows the famous entertainer Joe E. Brown and is so annotated on the back.Â  There are also a two photographs of a young serviceman in a cardboard frame [her boyfriend?].
Â
- The papers consists of a newspaper clipping about her overseas deployment, various Red Cross papers, receipts from stores in Calcutta, calling cards, an admission pass to The Calcutta Swimming Club, invitations to dances and concerts, her immunization papers (as well as that of her pet daschund Sniffer), printed instruction on how to wear an Indian sari, and mimeographed prayer sheets (including one on V-J Day).
Â
- ~ 10 letters written to her, including a 16 page handwritten letter from a British officer in Ethiopia, two letters from her mother (including one describing how she spent V-E Day), and correspondence about her 1949 wedding to a man with the last name of Key.
Â
- Included are miscellaneous family papers, including her fatherâs immigration papers and birth certificate (he was born in Scotland) and a stock certificate in her name.
Â
A nice cache of primary source materials for the involvement of women in WWII, as well as the history of nursing during that period. As an aside, we note this is the first WWII collection compiled by an American woman stationed overseas that we've had the privilege to offer. (Inventory #: 45276)
$1,500.00 add to cart or Buy Direct from Tavistock Books
Share this item

London : Routledge, Warne, and Routledge. Printed by Edmund Evans , (n. d.)
(click for more details about GOOD BOYS. Price One Shilling)
View all from this seller>