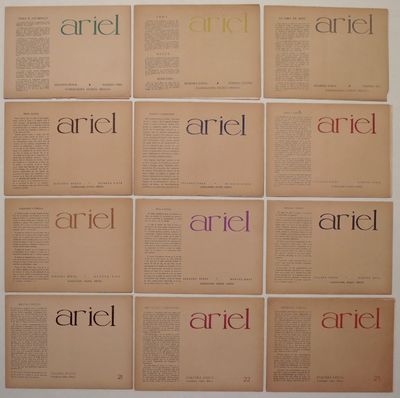 Ariel, an obscure Mexican journal of fine arts & literature was published erratically in a total of just 26 issues between January, 1949 & October, 1953. Each issue features poetry, criticism, reviews, & more from contributors including Concha Monica, Agustin Basave, Gloria Riestra, Carlos Valdes, & others.Editor Carballo, author, journalist, & one of the most recognized literary critics of Mexico, co-founded with Carlos Fuentes the Mexican Magazine of Literature. Good friends with Gabriel Garcia Marquez, he none-the-less was scathing in his critique of One Hundred Years of Solitude, describing Garcia Marquez as having "left humility behind" & going "through the twisted ways of pride, self-complacency." Perhaps his own greatest critic, Carballo described himself (& critics in general) as "an annoying but necessary figure … the critic is the spoiler, the movie villain of the West, the resentful, the bitter, the ogre and the witch of children's tales … he demands that others take risks while he looks at the bulls from the barrier." Quite uncommon, OCLC finds incomplete holdings at the University of Texas & the University of Colorado. (Inventory #: 0000406)
$300.00 add to cart Available from Citation Books.
Share this item
Citation Books.
Offered by