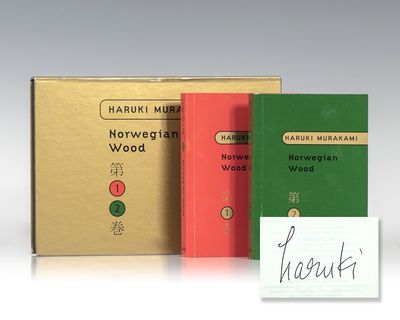 by Murakami, Haruki; Translated by Jay Rubin
London: Harvill, 2000. First editions of the author's most well-known work. Small octavo, original wrappers as issued. Both volumes are signed by Haruki Murakami on the title page. Both volumes are in fine condition and are in the original gold box. Translated by Jay Rubin. When Norwegian Wood was first published in Japan, it quickly attained cult status, making the author a national celebrity. It is a nostalgic story of loss and sexuality. The story's protagonist and narrator is Toru Watanabe, who looks back on his days as a freshman university student living in Tokyo. Through Toru's reminiscences we see him develop relationships with two very different women — the beautiful yet emotionally troubled Naoko, and the outgoing, lively Midori. The novel is set in Tokyo during the late 1960s, a time when Japanese students, like those of many other nations, were protesting against the established order. While it serves as the backdrop against which the events of the novel unfold, Murakami (through the eyes of Toru and Midori) portrays the student movement as largely weak-willed and hypocritical. Murakami adapted the first section of the novel from an earlier short story, "Firefly." The story was subsequently included in the collection Blind Willow, Sleeping Woman. (Inventory #: 896732)
$2,200.00 add to cart or Buy Direct from
Raptis Rare Books
Share this item