THE ADVENTURES OF HARRY RICHMOND 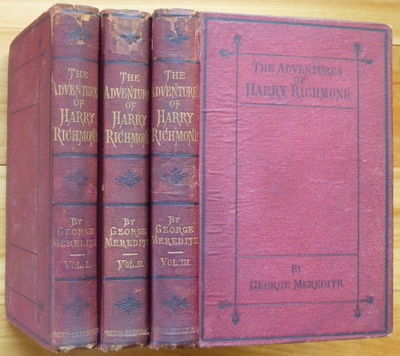 by Meredith, George
1871. [one of Meredith's scarcest] In Three Vols. London: Smith, Elder & Co., 1871. Original deep red cloth decorated in black and lettered in gilt on the spines. First Edition of the second-scarcest Meredith novel, "bested" only by RHODA FLEMING -- according to Michael Sadleir, whose copy this once was. (Our own experience would reverse this order.) Meredith returned to what was his forté-romantic comedy. Once more he wrote a close study of a father-son relationship, only this time the father is an impostor who out-Micawbers Dickens's Mr. Micawber in his belief that something will "turn up" to make his fortune. The son's ordeal is that he must perceive and reject the world of fantasy in which his father lives and achieve maturity through painful experience [C.L. Cline]. Meredith actually began this a good six years earlier, writing to a friend that he was beginning "An Autobiography." He wanted it to be a picaresque romance, something that would have great "popularity," which is to say, would generate lots of cash -- as he was then about to marry. But over the intervening years (during which RHODA FLEMING and VITTORIA were published), he was moving toward his later "psychological novels" -- so HARRY wound up somewhere in between, and succeeded as neither (although there was a "Second Edition" just 45 days later). This copy is in very good condition, with repairs at the spine ends that include more-or-less matching cloth inserted underneath; some of the (original) endpapers show some cracking. Atypically, there is no evidence that this set ever went to the lending libraries upon publication. Buxton Forman 14; Collie VIIIa; Sadleir 1686 and p. 381 (apparently Sadleir replaced this set when he finally found a "tired, but untouched" set). Provenance: small oval bookplate of Michael Sadleir in each volume; Vol I penciled signature of Walter E. Smith, likewise a noted bibliographer of Victorian literature. (Inventory #: 14051)
$1,350.00 add to cart or Buy Direct from
Sumner & Stillman
Share this item