[Tile Club- Arts & Crafts/Aesthetic Movement/Decorative Age- Rarity- One of a Hundred, Full Vellum Binding] A Book of the Tile Club 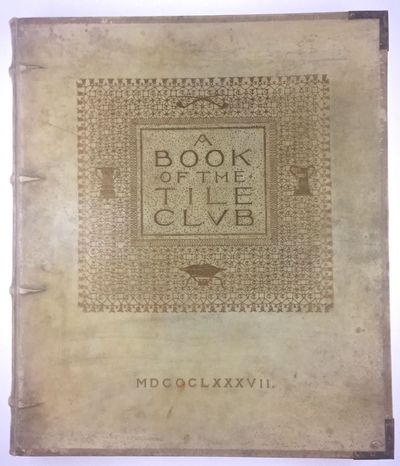 by Strahan, Edward [Stanford White]
Boston and New York: Houghton Mifflin and Company, 1887. First edition. First edition. The monumental "Edition De Luxe," One of Only a Hundred Numbered Copies (this copy un-numbered) issued in original publisher's full thick vellum boards exquisitely tooled in gilt, designed by Stanford White (1853-1906), renowned American architect and frontrunner among Beaux-Arts firms. His designs embody the so-called "American Renaissance." Cover design includes all-over gilt pattern embodying the title and surround by four Grecian urns, spine with four raised bands and ornate gilt designs on two panels, lettering on the second panel. Back cover with lettering, insignia and crosshatching, all in gilt. The corners have brass edges with small rivets, as issued. Elaborately decorated endpapers with gold designs, AEG. This is the rare version of the Tile Club book which very seldom turns up and this copy is the only one we've ever seen for sale of the 1/100 edition. The Tile Club was formed in 1877, predominantly a group of artists, writers, architects, and musicians working in New York City in order to promote and exchange ideas on arts and crafts, as well as organizing summer sketching expeditions. The budding group soon grew with luminaries joining such as Winslow Homer, William Merritt Chase, John H. Twachtman, Elihu Vedder, Julian Alden Weir, Edwin Austin Abbey, Arthur B. Frost, Augustus Saint-Gaudens, and Stanford White. Although the club was in existence for only ten years, it exerted a powerful influence on the development of the art and culture of late-nineteenth-century America. A wonderful copy, near fine, with no major flaws. The vellum has virtually no warping, rare for a book of this size and weight. A great rarity indeed. (Inventory #: 4253)
$4250.00 add to cart or Buy Direct from
Nudelman Rare Books
Share this item

[Billet- Movable, Hand-Colored] "We must not take offense..."