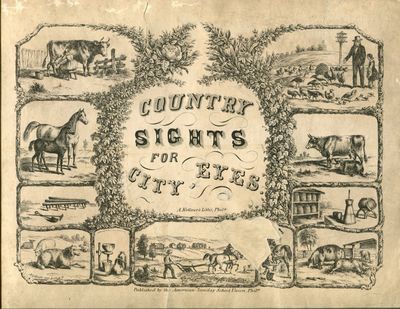 by (JUVENILE--KOLLNER ILLUSTRATIONS)
1858. (JUVENILE--KOLLNER ILLUSTRATIONS). Country Sights for City Eyes. Philadelphia: American Sunday School Union, 1122 Chestnut St., [not before 1858]. Obl. 4to. (9 x 12 in.) 12 pages of text and 12 full-page lithographed plates by Augustus Kollner of charming country scenes. Illustrated lithographed wrappers by Kollner. Quarter-sized hole in front wrapper and front flyleaf skillfully repaired, small skillful repair at spine, else a remarkably fresh, near-fine copy. In a cloth clamshell box with leather label (unevenly faded). Ex coll. S. Robert Teitelman. The handful of large-format children's books designed and illustrated by Augustus Kollner and published by the American Sunday School Union are among the rarest and most desirable of mid-nineteenth-century American children's books. Few have survived intact. Nicholas Wainwright, in his 1960 study of Kollner, says: "These books, with their delightful everyday scenes, were so popular that few have survived the hands of the children for whom they were designed. As a group, they constitute one of Kollner's most attractive and important efforts." The American Sunday School Union was first located at 1122 Chestnut Street in Philadelphia in 1857, and Country Sights for City Eyes first appeared in an ASSU catalogue in 1858 and continued to be listed for the next thirty-plus years. (Inventory #: 15113)
$4800.00 add to cart or Buy Direct from
Joseph J. Felcone
Share this item
Joseph J. Felcone Inc.
Offered by

Way Cast Up, and the Stumbling-Blockes Removed from Before the Fe

1677
(click for more details about Way Cast Up, and the Stumbling-Blockes Removed from Before the Fe)
View all from this seller>