Address of the Union State Central Committee, Upon the Issues Involved in the Presidential Contest 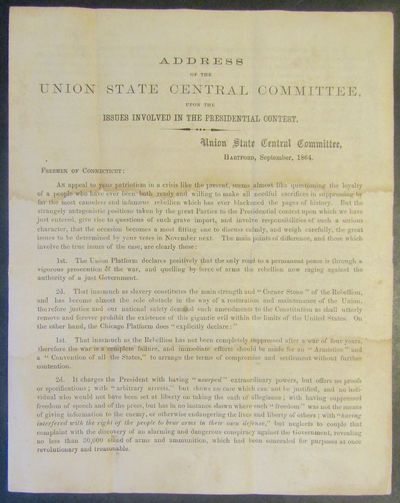 Addressing the “Freemen of Connecticut,” Chairman Batterson & others present a spirited defense of Abraham Lincoln & the prosecution of the Civil War while attacking the Democratic platform:“For more than a year past it has been well known that the hopes of the rebel leaders have been centered in the coming Presidential election. It has been no secret that they have relied fully upon the assurances of their northern allies, that a Democratic success would be favorable to their cause, and that these assurances have given life and encouragement to the Rebellion for many months past, is no longer questioned…”In closing, an appeal for the vote is vested in blood with a not atypical suggestion that to do otherwise would be unpatriotic: “Shame, eternal shame, if the blood of our brave soldiers has been spilled in vain because you sacrificed at the ballot-box the victories they have won in the field.”James G. Batterson, originally a manufacturer of monuments and gravestones, later a builder appointed by Lincoln as contractor for the construction of the Library of Congress, was also the founder of Travelers Insurance Company.Quite uncommon, OCLC finds three copies (6/7/2018). (Inventory #: 0000417)
$350.00 add to cart Available from Citation Books.
Share this item
Citation Books.
Offered by