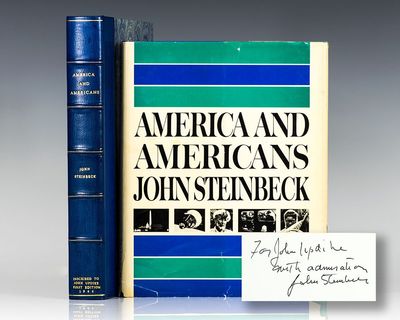 by Steinbeck, John [John Updike]
New York: The Viking Press, 1966. First edition of Steinbeck's final book. Quarto, original half cloth, illustrated, cartographic endpapers. With 136 pages of photographs, 24 in full color by 55 of the most prominent American photographers of the era including Ansel Adams, Sam Siegel, and Todd Webb. Association copy, inscribed by the author on the half-title page, "For John Updike with admiration John Steinbeck." American author John Steinbeck published his most notable works between 1937 (Of Mice and Men) and 1952 (East of Eden), and was awarded both the Pulitzer Prize for Fiction in 1940 and Nobel Prize in Literature in 1962. One of the most prolific American authors from the early 1960s until his death in 2009, fellow recipient of the Pulitzer Prize John Updike identified Steinbeck as one of his literary heroes at a young age. Both writers' works explored themes of crises related to faith, injustice, and family dynamics applied to small town 'everyman' protagonists. Both Steinbeck and Updike wrote in a realist tradition featuring their own distinctively rich and imaginative vocabulary and style of prose. Near fine in a very good dust jacket. Housed in a custom half morocco clamshell box. Jacket design by Christopher Harris. Photograph of Steinbeck to the rear panel by Paul Farber. From the library of John Updike. An exceptional association linking two of the greatest writers of twentieth century America. Steinbeck's final book, America and Americans combines the talents of the Nobel Prize-winning author and 55 of the most prominent American photographers of the era. The result is a spectacular portrait of America with its vital array of scenic beauty and human variousness with rich feature articles exploring the American government, American people, Americans as they relate to their land, and the paradox and dream of the pursuit of happiness. (Inventory #: 55056)
$15,000.00 add to cart or Buy Direct from
Raptis Rare Books
Share this item