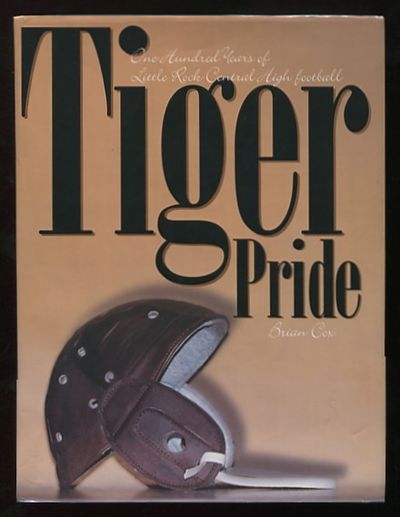 by Cox, Brian
Little Rock AR: Arkansas Business Ventures. Fine in Near Fine dj. 2005. First Edition. Hardcover. 0976542501 . [book itself is flawless; jacket shows just a touch of surface wear, some minor wrinkling/creasing at bottom of rear panel]. (B&W photographs) "An in-depth review of the school's century of excellence. Each season is captured through compelling narratives and historical photos. You will learn about some of the state's highest scoring games, the national championship game never played because of racial strife, battles against state colleges, the career of two-time All-American quarterback Houston Nutt, the unbelievable championship run of Coach Wilson Matthews and much more. This is much more than a story about Little Rock Central, however. It's an historical account of high school football in America, a must read for anyone interested in the game." OK, terrific -- but let's be honest: the first thing that comes to mind when you hear "Little Rock Central High School" isn't football, right? The school integration controversy that roiled the school and community in 1957 is discussed straightforwardly, but (understandably) much of the focus is on its effect on the football program, which was actually most severe during the 1958/59 school year, when the state's governor, Orville Faubus, ordered the city's public schools to be closed to all students (although teachers still had to report to work every day); during that football season, "most athletes in the city took classes via correspondence to remain eligible for athletics." It should also be noted that even after the school re-opened in 1959 with a court-approved integration plan in place, the football team remained lily-white for another six years: not until 1965 does an African-American player -- and then just one -- make an appearance in any of the team photos reproduced in the book. In 1966 there were two, and in 1967 three (almost as if a deliberate quota system was in operation), but the book's text doesn't address the team-integration issue at all, that I can see, even in passing. There was a marked upward spike in the number of black players in 1968 -- eight players out of 36 -- and by the mid-1970s there are at least as many black players in the team photos as white (many of them sporting magnificent Afros!). ***NOTE: Additional shipping charges for this heavy book will apply for non-U.S. customers; please inquire before placing your order.*** . (Inventory #: 23905)
$100.00 add to cart Available from ReadInk
Share this item
ReadInk
Offered by

Six Plays by Rodgers and Hammerstein [Oklahoma!; Carousel; Allegro; South Pacific; The King and I; Me and Juliet]

New York : Random House , [1955]
(click for more details about Six Plays by Rodgers and Hammerstein [Oklahoma!; Carousel; Allegro; South Pacific; The King and I; Me and Juliet])
View all from this seller>