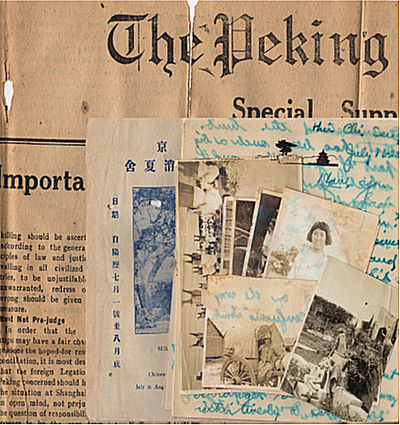 by "Jo" [Josephine Brown]
Small archive of correspondence, photos, and ephemera kept by an anti-imperialist American YWCA missionary in China as the country lurched through The May Thirtieth Movement towards the Second Chinese Revolution and eventually full civil war.

The archive consists of 11 captioned photos, a 14-page letter, a bilingual brochure for a Camp for Chinese Girls and Women, and a 17.5" x 22" anti-imperialist broadsheet. Some soiling, ink bleed, beginning splits, and minor insect predation.

The letter and its accompanying items were sent by Brown to a former colleague, probably in California's Imperial Valley, in the midst of the anti-Japanese, anti-British May Thirtieth Movement following the deaths of thirteen Chinese students who had attacked a police station in Shanghai's International Settlement in an effort to free eight striking workers who had been jailed for disturbing the peace after participating in melee at a Japanese-owned cotton mill.

In addition to describing her work with Chinese women and girls, Brown's heady political naiveté is apparent in her letter which contains a denial of Soviet attempts to influence Chinese politics, considerable anti-imperialist sentiment especially against Great Britain, enthusiastic support of the street protests ("how the students thrill me. I was right out with them during a demonstration in Peking"), and her idolization of a Soviet-backed, Chinese warlord, Feng Yuxiang, and his "marvelous scheme [for the] colonization of Mongolia." A transcript of the letter is included.
The anti-imperialist broadsheet in this archive is especially important. It is titled Many Important Statements Bearing on the Shanghai Case Issued and compiles numerous accounts of the May 30th Massacre (which led to the anti-Imperialist May Thirtieth Movement and Second Chinese Revolution) when the city police opened fire on anti-Japanese protesters who, jointly inspired by both Communists and Nationalists, were preparing to storm the police headquarters inside the International Settlement.

The pamphlet promotes a YWCA camp as "an opportunity for rest and recreation" for Chinese women, girls, students, teachers, doctors, and nurses.

As noted in a Kingston, New York newspaper article from 1965 (copy included), Josephine Brown devoted her life to attempting "to organize rural women in all parts of the world . . . with the feeling that these women should be freed from the limitations of home and village customs so that they can become articulate in the women's movement. . . ." She arrived in China following a YWCA assignment in California's Imperial Valley and served there for the next 11 years until she returned to the United States,no doubt as a result of the three-way conflict between the Chinese Nationalists, the Soviet-backed Communists, and Imperial Japan.
An exceptional first-hand account by a female American missionary activist of the birth of the political and military turmoil that would begin in earnest two years later with the White Terror and consume China for the next twenty-five years. (Inventory #: 009063)
$2,500.00 add to cart or Buy Direct from
Read'Em Again Books and Paper
Share this item