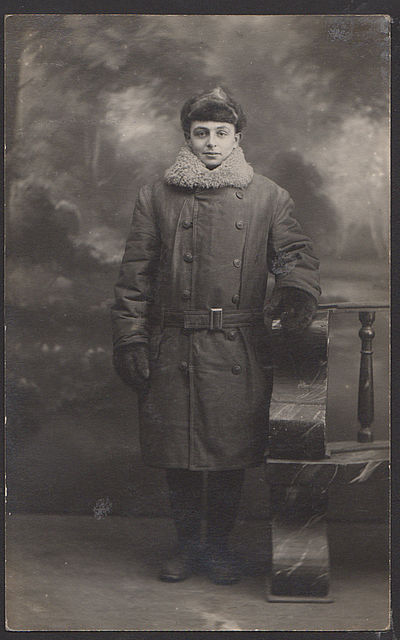 by Unidentified compiler
Photograph album documenting the participation of U.S. 31st Infantry Regiment (the "Polar Bears") in the Allied Intervention in Siberia following World War I and during the Russian Revolution.

This album contains 127 photographs and 28 mostly real photo postcards (RPPC) created using various photographic and photomechanical processes including silver gelatin, collotype, carbon, half-tone, etc. All but two of the photos and eight of the postcards relate to the U.S. Army's participation in the occupation of Siberia as part of the Allied Intervention in the Russian Revolution. The photographs and album are in very nice shape.

Other photographs are of American soldiers repairing destroyed railroad tracks, debarking from a river barge, at rifle practice, corralling horses, chopping wood, hip-deep in snow and in what must be the heaviest coat and furriest mittens ever made.

Some of the RPPC images (which are captioned in Russian and/or English) show Americans entering Vladivostok, their initial tent camp at Vladivostok, Vladivostok street and harbor scenes, the Flag Ship "Brooklyn," and the Vladivostok Army-Navy YMCA.

All 31st Infantry and other regimental photograph albums from Siberia during the Allied Intervention are very scarce; this one is no exception. (Inventory #: 009073)
$2,500.00 add to cart or Buy Direct from
Read'Em Again Books and Paper
Share this item

Letter from a Union Soldier who was taken prisoner at Gettysburg, but marked as a deserter before being paroled and hospitalized, attempting to obtain allowance payments

Annapolis, Maryland : U.S. General Hospital, Division No. 2 , 1863
(click for more details about Letter from a Union Soldier who was taken prisoner at Gettysburg, but marked as a deserter before being paroled and hospitalized, attempting to obtain allowance payments)

[New Haven, Connecticu] : Yale College , 1865
(click for more details about Printer's Copy of the Annual Greek Examination for the Freshman Class at Yale College)
View all from this seller>