Letter from a U. S. mariner held captive in Naples after his ship was captured and condemned during the Napoleonic Wars 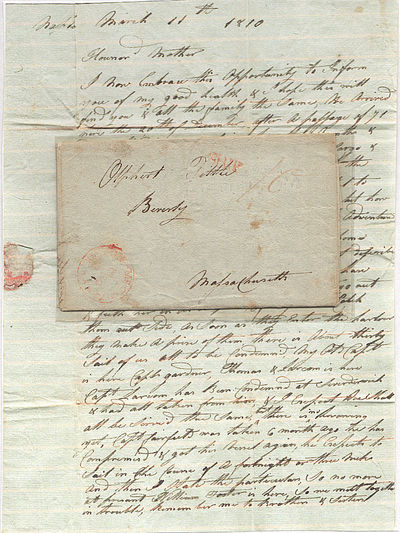 by Sent by Olphert Tittle
Naples, 1810. Unbound. Very good. This two-page stampless folded letter measures approximately 14.5" x 10" unfolded. It was sent by Olphert Tittle in Naples to Olphert Tittle (his father) in Beverly, Massachusetts. The letter is dated "March 11th 1810," and its salutation begins "Honor'd Mother." It bears a weak red strike of the circular Boston postmark with stars at the bottom (ASSC #203), a red "SHIP" handstamp, and a faint "16" cent manuscript rate mark (6 cents for receipt of a private ship letter + a 2-cent ship letter conveyance fee + an 8-cent delivery fee from Boston to Beverly). The letter is in nice shape with expected postal wear and soiling. Transcript is included. While the impressment of American sailors during the Napoleonic Wars by the British is well recorded in history books, far less has been written about the seizure and/or destruction of American ships, theft of their cargo, and detention of their crews by the French and their allies. In this letter, Tittle recounts that over 30 U.S. merchant vessels had been captured by the French and their Neapolitan allies and held at Naples in 1810. "They have taken our Adventure [his ship] and all from us, and now we must come home by way of Bussums Corner. I cannot describe the treatment we have suffered since we have arrived. Vessels bound direct . . . they go out and fetch her in as a prize. If they don't catch them outside, as soon as they enter the harbor they make a prize of them. There is about thirty sail of us all to be condemned. . . . Capt Larcom has been condemned . . . and had all taken from him. And I expect [we] will be servic'd the same, but there is no [word] yet. Captain Fairfact was taken 6 month ago. He has compromis'd and got his vessel again, he expects to sail in the course of a fortnight or three weeks and then I shall state the particulars." Although the ships and cargo were never recovered, the American consul in Naples was able to secure the seamen's release and purchase one of the condemned vessels, the ship Francis, from the Neapolitans to transport the 214 captured sailors back to the United States. The loss of ships and cargo was enormous; from Salem alone, it approached $775,000. (See Hurd: History of Essex County, Massachusetts, volume 1 and Williams: The French Assault on American Shipping, 1793-1813.) Exceptionally scarce, perhaps the only extant example of a letter from a U. S. seaman captured by the French during the Napoleonic Wars. At the time of listing, nothing similar is for sale in the trade, and no auction records are found at the Rare Book Hub. OCLC also shows no similar personal correspondence or writings at any institution, however the Peabody Essex Museum holds a ship's log from a vessel that ends when it was condemned in Lisbon in 1811. While mail from mariners during the earlier Quasi-War with France (1798-1800) appears in philatelic auctions from time-to-time, none of it has been from prisoners describing their captivity. No French, much less Neapolitan, captivity letters from the Napoleonic Wars have appeared at philatelic or other auctions, although there was one auction lot consisting of a Ship's Master letter expressing anxiety that his vessel might be taken by French privateers. (Inventory #: 009071)
$1,250.00 add to cart or Buy Direct from
Read'Em Again Books and Paper
Share this item