An advertising envelope for the American Tract Society's Tract House 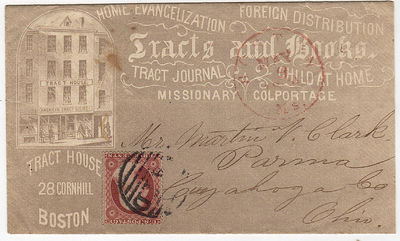 Colportage is a publishing system based upon the use of traveling carriers, known as 'colporteurs' or 'colporters.' to distribute books and religious tracts. It first became common in Europe as a method of selling unauthorized religious materials during the religious controversies of the Reformation. In addition to controversial works, these book peddlers also spread cheap editions of popular works to an increasingly literate rural population which had little access to city book shops.

The American Tract Society was a wildly successful evangelical organization, first established in 1814 as the New England Tract Society, which distributed Christian literature in the United States. It is still in existence today, and has distributed many, many millions of religious publications over the years.

In its 1850-1851 fiscal year alone, the society used 569 colporters (about a fifth of whom targeted German, French, Irish, Welsh, Spanish, and Norwegian immigrants) to visit over half a million American households. In about 250,000 of those visits, not only did they offer their publications, but they were able to spend time praying or evangelizing with family members. Additionally, the colporters organized about 13,000 local prayer meetings during their travels. Through their efforts over 450,000 society publications were sold and another 128,000 were given away to the poor and indigent. (See Ten Years of Colportage by the American Tract Society and "Dating American Tract Society Publications through 1876" by S. J. Wolfe.)

A seldom seen advertising item for the most successful and prolific U.S. book distributer of the 19th Century. (Inventory #: 009098)
$250.00 add to cart or Buy Direct from
Read'Em Again Books and Paper
Share this item