Letter to Thomas H. Gallaudet requesting that he arrange for the residential treatment of a prominent Massachusetts woman at the Hartford Retreat for the Insane 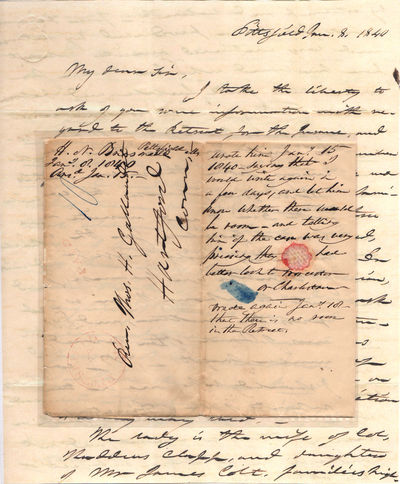 by Horatio Brinsmade
Pittsfield, Massachusetts, 1840. Unbound. Very good. This four-page folded letter measures 16" x 10" unfolded. It was sent to Reverend Thomas H. Gallaudet in Hartford, Connecticut by Horatio Brinsmade in Pittsfield Massachusetts. The letter is dated January 8, 1840. It bears a 10-cent blue manuscript rate mark in the upper right corner indicating the cost to deliver a letter a distance of up to 80 miles. It also bears a faint red circular Pittsfield postmark and red "PAID" handstamp. The letter is in nice shape with light wear and splits beginning along its mailing folds. A transcript will be provided. In this letter the Reverend Brinsmade beseeches Gallaudet, who was well-known for "the deep interest you take in those on whom the hand of affliction is in anyway laid," to attempt to obtain admission for one of his church members, Mrs. Thaddeus Clapp, the daughter of James Colt, at the Harford Retreat for the Insane where Gallaudet then served as the chaplain. Brinsmade writes in part: "There is a member of my church, a most estimable woman from one of our first families, who has been, for some three months past, . . . deranged. . . . Her derangement has been produced by intense and continued anxiety absent her husband who has been for some time quite feeble and depressed in spirits, but is now recovering, - still the effect of his solicitude, and watching, and abstinence has been to produce this mental aberration, which daily increases: I have advised them to put her in a "Retreat," which they now think of doing, and ask me to enquire if there is room and such accommodations as would suit a person of her condition in life: - can she have kind and good attendance, with such care of the physician as is needed and would Dr. F. think a case of this, so recent, and not violent, a . . . subject of his attention? . . . Please state what are the terms, and the probable expenses per week, though this is of little importance, only that the proper evaluations may be made. . . ." Gallaudet has docketed the letter: "12 dolls centre / 4 dolls wing / 13 weeks in advance / Bond Surety / "Wrote him Jan.y 15 1840 that I would write again in a few days, and let him know whether there would be room and telling him if the case was very pressing they had better look to Worcester or Charlestown / Wrote again . . . that there is no room in the Retreat.". The Gallaudet of this letter is, of course, the famed minister who revolutionized deaf education in 1817 when, along with Lauren Clerc and Mason Cogswell, he founded the first institution for educating the deaf in America, the Connecticut Asylum for the Education and Instruction of Deaf and Dumb Persons. He also served for many years in a patronage position as the part-time chaplain for the Harford Retreat for the Insane, where it is said the physicians worked hard to marginalize his insistence that the insane were more in need of salvation than medical care. Gallaudet ministered to the insane throughout his life both in jails and institutions and continued to do so long after health forced him to give up teaching the deaf. When he died in 1851 at age 63, he was still actively serving as a board member and the chaplain of a Middletown, Connecticut insane asylum. (See Sayers, The Life and Times of T. H. Gallaudet.) Brinsdale, a Yale classmate and long-time associate of Gallaudet, was also a deaf educator, having taught at the Hartford Asylum for over eight years between 1823 and 1831. Clapp was prominent in the Massachusetts wool trade and one of the most important and well-regard mill managers in the United States. Colt, another prominent mill manager, became quite wealthy after introducing Merino sheep into the New England wool trade. This fascinating letter to Gallaudet illuminates a side of his life that has been far overshadowed by his fame as a deaf educator. It is made all the more desirable by the docketing in Gallaudet's hand. Although correspondence and documents related to Gallaudet's career in deaf education show up at auction, for sale within the trade, and are held by several institutions, similar material related to his work with the insane is quite scarce. At the time of listing, there are no Gallaudet items related to his work with the insane for sale in the trade; neither ABPC nor the Rare Book Hub list auction records related to Gallaudet's work with the insane, and OCLC shows no similar institutional holdings. (Inventory #: 009067)
$750.00 add to cart or Buy Direct from
Read'Em Again Books and Paper
Share this item