A YEKKISH MAN ESCAPES THE HOLOCAUST 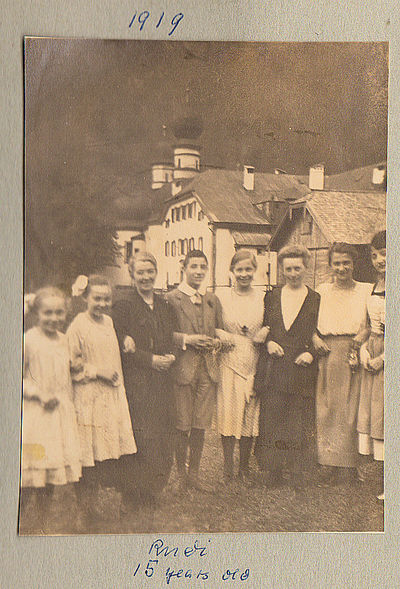 by Compiled by Lotte Frank as a 50th birthday gift for her brother, Rudof (Rudi)
Photograph album documenting the family life of a Yekkish man including his immigration into the United States as anti-Semitism reached a crescendo in Nazi Germany

This 11" x 7" leatherette album contains 64 photographs and about a dozen pieces of ephemera. Most items are captioned in either English or German. The photos range in size from 1" x 2.5" to 5.5" x 3". Everything is glued to the album pages. The photos, ephemera, and pages are in nice shape. The album is worn, and the binding a little wobbly.

Photos of the Franks' grandmother and parents (none of whom made it out of Germany and died in 1939 and 1943),

Pre-war images of the Frank family,

The Franks' pre-war homes and businesses in Bad Kissingen and Leipzig,

Images of Trieste and Cuba during Rudi's multi-year journey to the United States, and

Rudi's post-war life in New York.Rudi Frank was born in Bad Kissingen in 1904 where it appears his father was part owner of a fabric or scarf store. With the rise of the Nazi party, Rudi left Germany in 1935 and settled in Trieste.
In 1938-the beginning of the Nazi's most aggressive attacks upon Jews and confiscation of their property-Rudi was able to book passage from Trieste to Cuba where a member of the Franks' extended family apparently lived. Immigration records show Rudi then entered the United States at Key West.

There are no photos of the war years; however, the album picks up again in 1946 and continues until 1954 with photos of Lotte, Rudi, and their American families in New York. There is no direct mention of the holocaust, the war, or the fate of Rudi's parents other than to note his father died in 1939 and his mother in 1943.

A well-done and fascinating album that, between the lines, documents the escape of a young Jewish man from the Third Reich, made all the more poignant by what is not explicitly shown or said. (Inventory #: 009064)
$750.00 add to cart or Buy Direct from
Read'Em Again Books and Paper
Share this item