Ist die Trägheit eines Körpers von seinem Energieinhalt abhängig? [Does The inertia of a body depend upon its energy-content?] 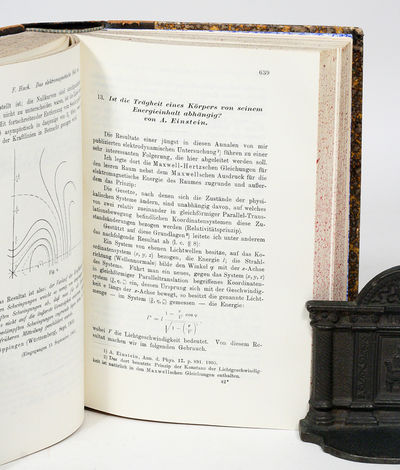 by EINSTEIN, ALBERT
Leipzig: Johann Ambrosius Barth, 1905. First edition. Contemporary morocco over marbled boards. Very Good. FIRST PRINTING of Albert Einstein's groundbreaking 1905 paper, the introduction and derivation of the most famous equation in modern physics: E=mc2. "A few months after first publishing the theory of relativity, Einstein discovered something that particularly intrigued him; the relation between inertial mass and energy. He wrote to Conrad Habicht during the summer of 1905: 'One more consequence of the paper on electrodynamics has also occurred to me. The principle of relativity, in conjunction with Maxwell's equations, requires that mass be a direct measure of the energy contained in a body; light carries mass with it. A noticeable decrease of mass should occur in the case of radium. The argument is amusing and seductive, but for all I know the Lord might be laughing over it and leading me around by the nose'" (Stachel, Einstein's Miraculous Year). Einstein continued to work late into the summer on this "amusing and seductive" problem before proving the mass-energy relationship that would become known throughout the world as the simple and elegant E=mc2. Received by Annalen der Physik on September 27, Einstein's derivation and proof of his most famous equation was a dramatic contribution to his annus mirabilis of 1905. Weil *10. Note: In this paper and others until 1912, Einstein used the symbol "L" for energy in his equations and wrote the formula in the form: Mass= L/c2. In: Annalen der Physik, Vierte Folge, Volume 18, part 13, pages 639-41. Leipzig: Barth, 1905. Octavo, contemporary half-morocco over marbled boards. The whole volume 18 offered, complete with volume halt-title, title, and contents. Some scuffing to spine of binding; text exceptionally fine. A rare copy in a contemporary binding with no institutional stamps. (Inventory #: 2103)
$5,000.00 add to cart or Buy Direct from
Manhattan Rare Book Company
Share this item