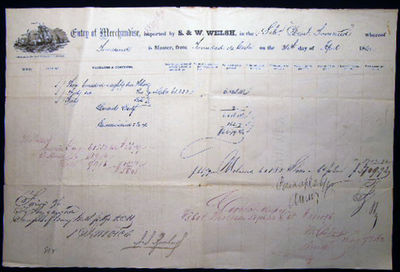 by (Americana - 19th Century - Civil War - Shipping - Customs Duties)
Philadelphia, PA: Not Published, 1862. Bill of lading & Entry of Merchandise form, completed in manuscript. Dated 26th April, 1862 for the Schooner Daniel Townsend; Townsend, master; sailing from Trinidad de Cuba; bringing in a cargo of molasses. The goods were imported by S. & W. Welsh and are listed in the packages and contents section of the form. The quantities are calculated for customs duties and signed by the agents in charge in manuscript. The reverse with the District and Port of Philadelphia bill of lading affirmation printed information, partially filled-in and with receipted note of duties paid on the blank panel at the bottom of the sheet. Form with a small woodcut ships-at-sea scene at upper left corner, printed and sold by Chandler Printer No. 306 & 308 Chestnut St. 3rd Story. Approx. 11" x 17" size; old fold lines, little nicks, closed edge-tears to the paper edges, edge-soiling; overall, in very good condition. American Civil War era maritime trade business, shipping & customs imports history ephemera. R. Craig Koedel in his article Mullica River Ships In The Age Of Sail (1987) writes that "...Of interest, the 245-ton schooner Daniel Townsend, built at Bass River in 1857, evidently was caught in a southern port at the start of the Civil War. The protest of Captain William H. Townsend against his arrest and that of his crew in Florida in May, 1862, is included in Jonathan Pitney's Notorial Records. At the time, the Townsend was enrolled at the Port of Great Egg Harbor." (New Jersey) . Manuscript. Not Bound. Very Good. (Inventory #: 25426)
$65.00 add to cart or Buy Direct from Certain Books
Share this item
Certain Books
Offered by