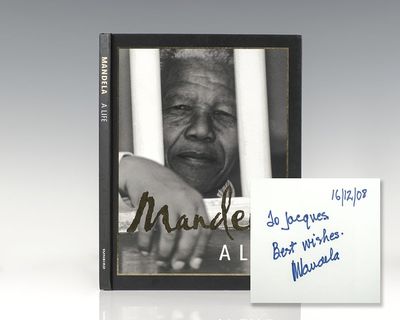 by Mandela, Nelson
Cape Town: Sunbird Publishers, 2007. First edition of this wonderfully illustrated work on the life of Nelson Mandela. Quarto, original illustrated boards, illustrated throughout. Boldly inscribed and dated by Nelson Mandela on the front free endpaper. Preface by Adrian Hadland. In fine condition. Nelson Mandela was a South African anti-apartheid revolutionary, political leader, and philanthropist, who served as President of South Africa from 1994 to 1999. He was the country's first black head of state and the first elected in a fully representative democratic election. His government focused on dismantling the legacy of apartheid by tackling institutionalized racism and fostering racial reconciliation. Ideologically an African nationalist and socialist, he served as President of the African National Congress party from 1991 to 1997. Widely regarded as an icon of democracy and social justice, he received more than 250 honors--including the Nobel Peace Prize--and became the subject of a cult of personality. He is held in deep respect within South Africa, where he is often referred to by his Xhosa clan name, Madiba, and described as the "Father of the Nation". (Inventory #: 67435)
$1,750.00 add to cart or Buy Direct from
Raptis Rare Books
Share this item

The History of the Decline and Fall of the Roman Empire.

London : Printed by J. F. Dove for W. Baynes and Son; G. Cowie and Co; J. Dowding. Dulau and Co.; et al , 1823
(click for more details about The History of the Decline and Fall of the Roman Empire.)

New York : Grove Press Inc. , 1978
(click for more details about Every Good Boy Deserves Favor and Professional Foul.)
View all from this seller>