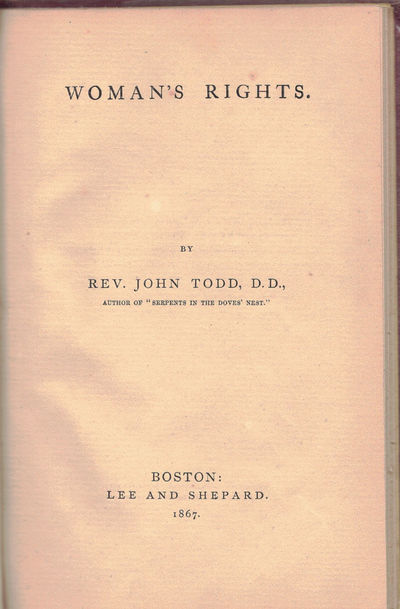 by TODD, Rev. John
Boston: Lee and Shepherd, 1867. First edn. 8vo, pp. 27. Maroon cloth, a fine copy. Krichmar 2064. A scarce little anti-feminist monograph by the author of a number of books addressed to boys and girls. Todd notes the wide-spread uneasiness,!a discontent with woman's lot, impatient of its burdens, rebellious against its sufferings, an undefined hope of emancipation ... This feeling crops out in publicly ridiculing marriage, dwelling on its evils, raving about the tyranny of men ... getting up Women's Conventions, and propagating theories, weak, foolish, and criminal. Todd has no difficulty admitting that men and woman are equal in intellect but states that God has ordained the position of women and that her own instincts are in the way of her independence from men. (Inventory #: 13960)
$248.00 add to cart or Buy Direct from
Second Life Books
Share this item

London : Fortey , 1845
(click for more details about A COPY OF A LOVE LETTER; written by a Old Gentleman to a Young Lady in this Neighborhood (signed O. C.) (with:) The Young Lady's Answer)

ALICE GRAY | THE GIRL OF MY HEART