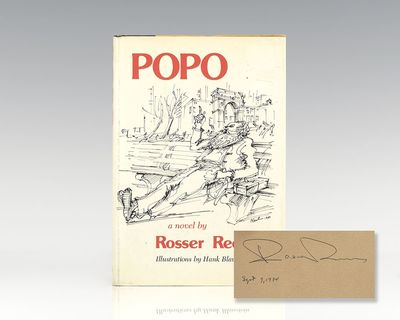 by Reeves, Rosser. Illustrated by Hank Blaustein
New York: The Vanguard Press, 1980. First edition of television advertising pioneer Rosser Reeves' singular novel. Octavo, original half cloth. Signed and dated by the author on the front free endpaper, "Rosser Reeves, Sept 9, 1980." Fine in a near fine dust jacket. Legendary advertising executive Rosser Reeves rose to the forefront of commercial advertising in 1950s America, overseeing the introduction of dozens of unique slogans that generated millions for his clients. The AMC program Mad Men used Reeves as one of the models for the series' accomplished protagonist, Donald Draper. Reeves' only novel, Popo, tells the story of a poet who leaves a life of material wealth to move to Greenwich Village to pursue his poetry. (Inventory #: 88143)
$100.00 add to cart or Buy Direct from
Raptis Rare Books
Share this item