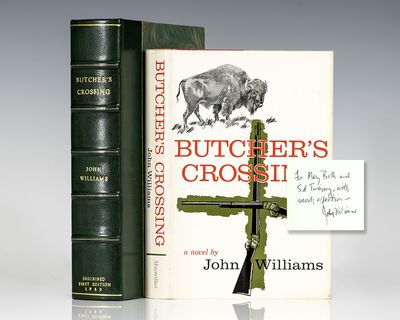 by Williams, John
New York: The MacMillan Company, 1960. First edition of Williams' second novel. Octavo, original cloth. Association copy, inscribed by the author on the front free endpaper, "For Mary Beth and Ed Twining, with much affection- John Williams." Ed Twining was an English professor at The University of Denver, where John Williams also taught and was the director of the creative writing program. The two were lifelong friends. Near fine in a near fine price-clipped dust jacket. Jacket design by Gilbert Etheredge. Housed in a custom half morocco clamshell box. A nice association. "Harsh and relentless yet muted in tone, Butcher's Crossing paved the way for Cormac McCarthy. It was perhaps the first and best revisionist western" (The New York Times Book Review). It is the 1870s, and Will Andrews, fired up by Emerson to seek "an original relation to nature," drops out of Harvard and heads west. He washes up in Butcher's Crossing, a small Kansas town on the outskirts of nowhere. Butcher's Crossing is full of restless men looking for ways to make money and ways to waste it. Before long Andrews strikes up a friendship with one of them, a man who regales Andrews with tales of immense herds of buffalo, ready for the taking, hidden away in a beautiful valley deep in the Colorado Rockies. He convinces Andrews to join in an expedition to track the animals down. The journey out is grueling, but at the end is a place of paradisal richness. Once there, however, the three men abandon themselves to an orgy of slaughter, so caught up in killing buffalo that they lose all sense of time. Winter soon overtakes them: they are snowed in. Next spring, half-insane with cabin fever, cold, and hunger, they stagger back to Butcher's Crossing to find a world as irremediably changed as they have been. "Butcher's Crossing dismantles the myth of the west, revealing a horror story about the grinding day to day of just surviving...[a] restrained and gorgeous lyricism...even in its softer moments it doesn't overdo anything, and the moral criticism is in the precision of the language, the now-famous simple and elegant Williams prose" (Bret Easton Ellis). (Inventory #: 31014)
$5,500.00 add to cart or Buy Direct from
Raptis Rare Books
Share this item

New York : Prentice-Hall , 1952
(click for more details about The Power of Positive Thinking.)

New York : William Morrow and Company , 1984
(click for more details about Ramona Forever.)
View all from this seller>