THE SECRET HISTORY OF ELIZABETH, QUEEN OF ENGLAND, AND THE EARL OF ESSEX. TO WHICH IS ADDED, AN ACCOUNT OF THE SUFFERINGS, TRIAL AND BEHEADING OF MARY, QUEEN OF SCOTLAND, BY QUEEN ELIZABETH. By a Person of Quality 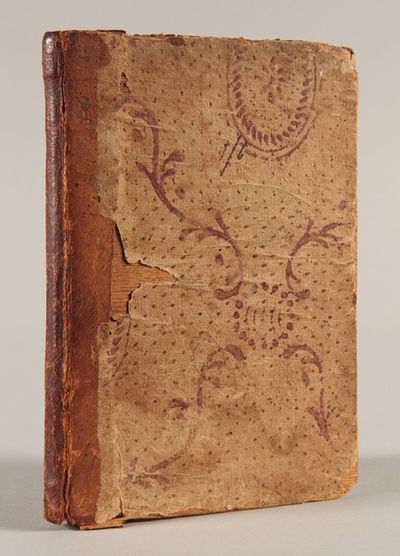 by [Elizabeth I]: [Vermont]
Rutland, Vt, 1799. 80pp. 12mo. Contemporary half sheep and hand-decorated paper over birch boards. Moderate wear to edges and spine, front hinge starting. Mid- 19th-century pencil ownership inscription on titlepage; 20th-century bookplate on front pastedown. Light dampstaining at lower gutter margin of initial leaves; moderate tanning, scattered foxing. Very good, in original condition. A rare early American edition of this salacious and semi-fictional account of the private life of Queen Elizabeth I, and her liaisons with Robert Devereux, Earl of Essex. Their tempestuous relationship ultimately ended in Essex's execution in 1601. The work also includes a dramatic account of the execution of Mary, Queen of Scots. This anonymous expos� "by a person of quality" was published numerous times in the British Isles, sometimes under a false imprint, beginning in 1680, and first published in France in 1678. It is unclear why an edition was called for in rural Vermont at the end of the 18th century, but its popularity as a titillating entertainment is unquestionable. An intriguing and extremely scarce late 18th-century Vermont imprint. ESTC locates only two copies, at the American Antiquarian Society and Oxford; McCorison adds two more, at the Vermont Historical Society, and the present copy from the collection of Hall Park McCullough, in an attractive, rustic, and unsophisticated binding. ESTC W27270. EVANS 36286. McCORISON 539. (Inventory #: WRCAM54485)
$850.00 add to cart or Buy Direct from
William Reese Co. - Americana
Share this item