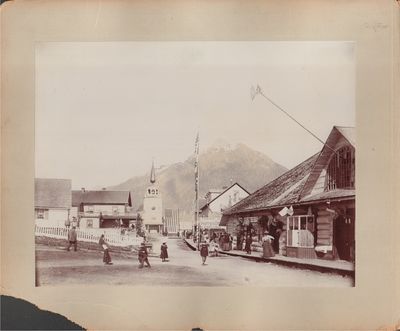 Good. Four mounted albumen prints depicting scenes from Alaska and British Columbia. Photographer is unknown. Circa 1900. There are two mounts, with one print on verso and one on recto of each mount. Two images depict the steamship "Queen": one docked at a small town, the other is titled "Steamship Queen, Victoria, British Columbia." Two images depict town scenes: one is titled "Fur Stores in Juneau", the other image depicts a street scene in Sitka, Alaska. Prints measure 9 ½" x 7 ¼" (without mounts). In good condition. One mount has corner missing, not affecting prints, and moderate soiling, the other mount has moderate dampstaining and soiling. One of the prints had poor exposure, and a 2" piece is missing from the corner of one of the steamship prints, affecting content; all prints have moderate toning, light soil and silvering. These four images provide a historic record of two of Alaska's well-known coastal towns. . (Inventory #: 016305)
$450.00 add to cart Available from
Back of Beyond Books
Share this item