An American In India In 1812 Reports: “They Worship But One God The Supreme Ruler Of The Universe, Who They Say Is Everywhere & At All Times Of Him They Have No Image, No Man Having Seen Him; The Gods They Use Are Representations Of Inferior Divinities, Which Are Destroyed After The Celebration Is Over” 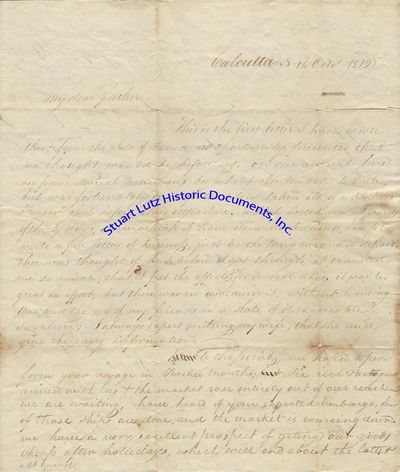 signed
by (CALCUTTA, INDIA)
(CALCUTTA, INDIA). ALS. 3pg. 8” x 10”. October 1812. Calcutta. An early letter from India signed “R Burr” to his father, Hudson Burr of Mount Holly, New Jersey. Rowland Burr reported: “My dear Father, This is the first letter I have wrote thee; From the Isle of France no opportunity presented that we thought would be before us. On our arrival here we found Several American by which I intended to rite, but was fortunately, or unfortunately taken ill of a Bilious Fever just before their departure, which lasted ne upwards of thirty days, since which I have done no business, except write a few letter of business, just as the Brig caravan departed. Thee was thought of but before I got through, it exhausted me so much that I felt the effects of it for several. To the point, we hoped to perform your voyage in Twelve months., Six rich Portuguese arrived with us & the market rose entirely out of our reach - we are waiting, have heard of your expected Embargo, four of those ships are done, and the market is coming down. We have a very excellent prospect of getting our goods cheap after holidays, which will end about the latter x 26 August. Part of this month we expect to leave here by the first to the middle of December. My prospects this voyage are justly flattering. Should goods command a high price at home, it ill place me once more completely on my legs, as it would enable me to payoff the half of our deficiency. My proportion; which I would most willingly do, if commerce is open, if I can work: In this way, for a few years, it would answer my desires which shall be limited to a competency. Octor. 12, 1812. We returned from an excursion up the river, having seen little to please or divert us, on our way we stop'd at a Siccars of ours who has spent upwards of Dollars 60,000 in erecting Te God Houses a Ghot, or paved steps, with an arch on the bank, for the Accommodation of poor people to go to bath & get water from the river. Two small octagon pleasure Houses & Gardens for the cultivation of flowers used in sacrificing to the Gods & river. We found him busy in finishing his Gods, for the celebration of these three succeeding days, they were made of wax, gandily decorated with tinsels of flowers of a great variety of colours Boorypoorja, or, was the principal two on each side of her, their children near them, in all 9 or 10 & occupy'd some 10 to 14 feet square, the figures being pretty large. 14th. They worship but one God the supreme ruler of the universe, who they say is everywhere & at all times of him they have no Image, no man having seen him; the gods they use are representations of inferior divinities, which are destroyed after the celebration is over - with the exception of such as are found in their principal Temples, made of Bronze marble, &c. the principals of their religion appear pretty much lost, few of their priests understands much of what they pretend to teach. - I have not found to who the same a' c - & you can get little more from them, than "so man say, God do" - - - - 23rd Octor. Thy aft R Burr”. The letter is in very good condition with ink that has slightly faded and mailing folds. An early letter from India by an American. (Inventory #: 4411)
$250.00 add to cart Available from
Stuart Lutz, Historic Documents, Inc.
Share this item