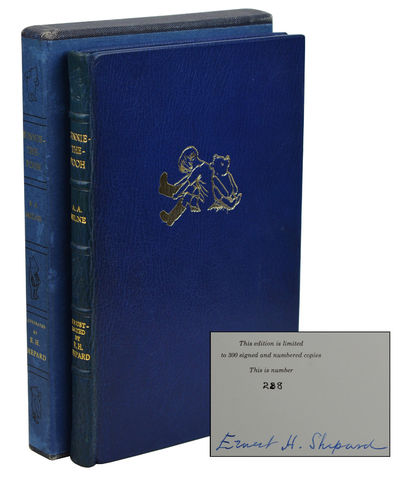 by Milne, A. A.; Shepard, E. H. [Illustrations]
London: Methuen Children's Books, 1973. Signed Limited Edition. Hardcover. Very Good. One of a limited 300 numbered copies signed by E. H. Shepard. In publisher's blue morocco, hand bound by Zaehnsdorf, with all edges gilt and color illustrations by Shepard. Near Fine with slight fading to spine; in a Very Good publisher's cloth-edged paper covered slipcase, which exhibits light rubbing. Shepard is best known for illustrating the original 1926 Winnie the Pooh, and would later lament that this claim to fame over-shadowed the rest of his work. This limited was signed by Shepard when the artist was in his 90s, three years before his death in 1973. (Inventory #: 180628002)
$1,750.00 add to cart Available from
Burnside Rare Books
Share this item
Burnside Rare Books
Offered by

Santa Rosa : Black Sparrow Press , 1994
(click for more details about Pulp)
View all from this seller>