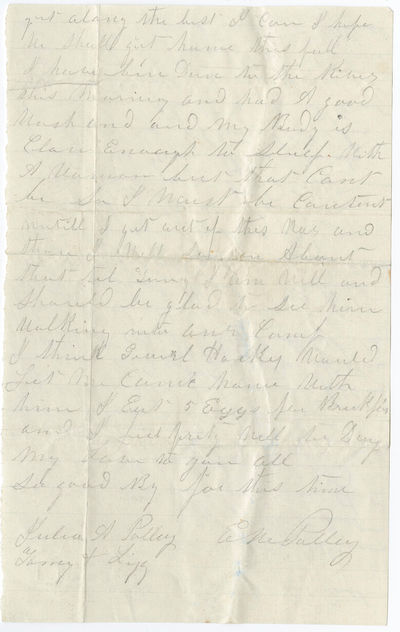 by ERASTUS U. POLLAY
"I have bin Down to the River this Morning and had A good wash and my Body is Clan Enough to sleep with a Woman but that Cant be So I must be Content untill I get out of this War and then I will see you About that" ERASTUS U. POLLAY.
Autograph Letter Signed, to Julia A. Pollay, May 31, 1863, Falmouth, VA, 2 pp, 8vo., one slight fold cut (text not affected), otherwise fine condition.
Complete Transcript

My Dear Wife and Children

I Recd your Leter of the 25 Last night and was glad to heare that you got all of my Leters and I hope you have got the one I send on Friday for I sent my 2 months pay in it $26.00 for you and 50ct for tom if you get that all Right I shall be glad I sent one to Lily with $2 Last Week I Bought me a new straw hat of Ned Bryan he has them to sell I have plenty of paper and you need not send me any thing onely A Leter as often as you Can for that is all I want Oh I should give Any thing if I could be home But I Cant and I Must get along the best I can I hope we shall git home this fall I have bin Down to the River this Morning and had A good wash and my Body is Clan Enough to sleep with a Woman but that Cant be So I must be Content untill I get out of this War and then I will see you About that tel Linny I am well and should be glad to see him walking into our Camp I think Generl Hooker would Let me come home with him I Eat 5 Eggs for Breakfast and I feel prety well to Day My Love to you all So good By for this time

After his defeat at the hands of Confederate General Robert E. Lee at the Battle of Chancellorsville in early May, General Joseph Hooker withdrew his Army of the Potomac across the Rappahannock River and encamped near Falmouth, Virginia, just a couple of miles across and upriver from Fredericksburg.

There, Pollay wrote to his wife and children about camp life, a bath in the Rappahannock River, and makes a veiled reference to physical intimacy. Perhaps his statement that "I think Generl Hooker would Let me come home with him" reflected the soldiers' expectation that Hooker would be replaced in command of the Army of the Potomac. President Abraham Lincoln did not immediately replace Hooker after the disaster at Chancellorsville, but three days after this letter, the Army of Northern Virginia began its second invasion of the North. By mid-June, it was crossing the Potomac River into Maryland and then into Pennsylvania. The Army of the Potomac followed, crossing the Potomac in late June. In a dispute with the president and General-in-Chief Henry W. Halleck, Hooker impetuously offered his resignation, and Lincoln accepted it, replacing Hooker with corps commander General George G. Meade, who battled Lee at the Battle of Gettysburg later that week.

Erastus Pollay (1819-1863) was born in New York, and married Julia Ann Barnum at Rochester, New York, in April 1847. In the late 1840s to 1850, he was a beer peddler in Rochester. In 1860, he was a clerk in Rochester, where he lived with his wife and two children. He enlisted as a private in August 1862 and was mustered into Company H of the 140th New York Volunteers the following month. He deeply missed his family. In December 1862, on the eve of the Battle of Fredericksburg, he wrote, "I wish I could be home this cold winter for it is hard on the old man but he most stand it until god or Abraham calls him home and I hope it will be Abe and start soon." He fought in the Battles of Fredericksburg, Chancellorsville, and perhaps Gettysburg. After spending some time in the hospital, Pollay was discharged on September 18, 1863, at Beverly Ford, Virginia. Pollay died at home on November 2 of chronic diarrhea, contracted at Falmouth, Virginia, from which he wrote this letter.

Joseph Hooker (1814-1879) was born in Massachusetts and graduated from the United States Military Academy in 1837. He served in the Seminole and Mexican Wars and resigned from the army in 1853. Returning to the army during the Civil War, he gained promotion to Major General, and in January 1863, President Abraham Lincoln placed Hooker in charge of the Army of the Potomac. Known as "Fighting Joe" or "Old Joe," Hooker was an aggressive commander. Famously outwitted by General Robert E. Lee at the Battle of Chancellorsville in early May, he remained in command, until Lincoln replaced him with General George G. Meade on June 28, 1863. Hooker led a corps under General William T. Sherman in the Atlanta campaign in 1864, and commanded the Northern Department from late 1864 to the end of the war. (Inventory #: 21265.12)
$250.00 add to cart Available from Seth Kaller
Share this item