ALBUM OF SILVER GELATIN PHOTOGRAPHS OF THE NEW YORK PORT OF EMBARKATION, c.1943 - 1944 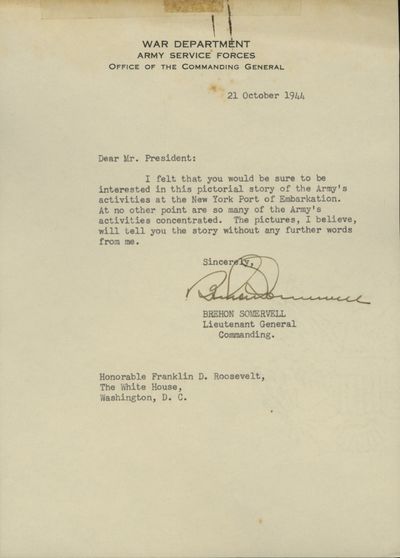 by [Roosevelt, Franklin] War Department, Army Service Forces
Album of 143 silver gelatin photographs, largely 33 x 26.5 cm or the reverse, printed on a warm and cold tone photographic stock, dry mounted on album leaves 40.6 x 38 cm, recto only with printed captions. Full blue morocco covers, lined in blue silk, gathered with screw posts and bearing the silver insignia of the Army Services Forces and imprinted "Franklin D. Roosevelt." Very good. Laid-in is a TLs from Lieutenant General Brehon Somervell on the letterhead of the War Department, Army Service Forces, Office of the Commanding General, dated 21 October 1944: Dear Mr. President: I felt that you would be sure to be interested in this pictorial story of the Army's activities at the New York Port of Embarkation. At no other point are so many of the Army's activities concentrated. The pictures, I believe, will tell you the story without any further words from me." The photographs depict the full logistical operations of the New York port, including machinery, munitions, troops and transport, and range from broad views of the port to portraits of the troops. The photographic style is largely of the modernist mode, with strong diagonals, aerial views at off-kilter angles, and close-ups of machinery and large equipment.

Although the photographer(s) are not identified, there is a very strong resemblance to the work of Margaret Bourke-White, who did make an official portrait of General Somervell and was enlisted by the General to photograph the logistics of the North African and Italian theater in 1943; "My assignment to Italy was an unusual one. A request for my services came from the Pentagon...the Army Service Forces under General Brehon Somervell... I was pleased to learn that it was my ability to photograph engineering subjects that impelled General Somervell to ask for me. As before with the Air Force, my work was for both Life and the Pentagon. This was an assignment of great scope that would give me a look at the war from many aspects." Bourke-White, Margaret. PORTRAIT OF MYSELF. NY, 1963. p.235. Further, when LIFE Magazine published Bourke-White's photo essay, January 10, 1944, the introduction states: "The pictures on these pages, taken by LIFE photographer Margaret Bourke-White in the United States and North Africa, show the tremendous size of the job done by the ASF and the variety of items it supplies."

Many of these images have been digitized, and are made available online from a disbound copy in the Robert P. Patterson Collection at the Library of Congress. Robert Porter Patterson (Sr.) 1891 - 1952, was the United States Under Secretary of War under President Franklin Roosevelt and the United State Secretary of War under President Truman from September 27, 1945 to July 18, 1947. One could presume that other copies of this album were distributed to others in the cabinet of President Roosevelt. (Inventory #: 52697)
$25,000.00 add to cart or Buy Direct from
Andrew Cahan: Bookseller
Share this item
Andrew Cahan: Bookseller, Ltd.
Offered by