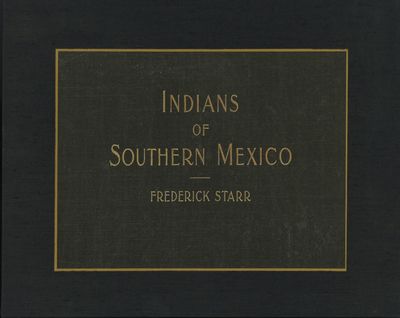 by Starr, Frederick
Chicago: Printed for the author by the Lakeside Press, 1899. First edition. Starr, Frederick. Oblong folio, 32 pp., 141 b&w captioned collotype plates printed recto one or two images to a plate. Gilt-titled cloth with a few tiny snags at the edges and light rubbing and spotting. Very good. Housed in a later slipcase of cloth with inset titled cloth in gilt. Laid-in are four silver and albumen photographs varying in size from 238 x 174 mm. to 104 x 82 mm.; two by William Henry Jackson, another by C. B. Waite. Anthropological studies (1898 and 1899) of some tribes in the states of Mexico, Michoacan, Tlaxcala and Puebla. The tribes visited in the author's two journeys were the Otomi, Tarascan, Aztec, Tlaxcalan, Mixtec, Triqui, Zapotec, Mixe, Tehantepecahno (Axpotec), Juave, Chontal and Cuicatec. From fifty to sixty photos were taken in each tribe; portraits (front and side view), groups (showing full figures and costumes); daily life and industries; and views were made by Charles B. Lang and Bedros Tartarian. "Frederick Starr (1858-1933), an American, created the Department of Anthropology at the University of Chicago in 1892, where he worked until his retirement in 1923. He conducted ethnographic expeditions worldwide but was especially interested in Japan and Mexico. Starr was one of the chief exponents of physical anthropology and saw the value of photography in being able to provide what was believed to be 'scientific' evidence of racial characteristics and differences. In 1899, he published a photographic album, Indians of Southern Mexico, representing the different physical characteristics of various indigenous groups." (MEXICO: FROM EMPIRE TO REVOLUTION, PHOTOGRAPHERS, by Charles Merewether, Collections Curator, Getty Research Institute, 2002). The edition was limited to 560 numbered and SIGNED copies, of which 60 special copies were printed on Japan paper, this is #14 of the 60 special copies. (Inventory #: 52676)
$4,250.00 add to cart or Buy Direct from
Andrew Cahan: Bookseller
Share this item
Andrew Cahan: Bookseller, Ltd.
Offered by

THE HUMAN FIGURE IN MOTION:; AN ELECRO- PHOTOGRAPHIC INVESTIGATION OF CONSECUTIVE PHASES OF MUSCULAR ACTIONS

London : Chapman & Hall , 1901
(click for more details about THE HUMAN FIGURE IN MOTION:; AN ELECRO- PHOTOGRAPHIC INVESTIGATION OF CONSECUTIVE PHASES OF MUSCULAR ACTIONS)

ANIMALS IN MOTION:; AN ELECTRO-PHOTOGRAPHIC INVESTIGATION OF CONSECUTIVE PHASES OF ANIMAL PROGRESSIVE MOVEMENTS

London : Chapman & Hall , 1899
(click for more details about ANIMALS IN MOTION:; AN ELECTRO-PHOTOGRAPHIC INVESTIGATION OF CONSECUTIVE PHASES OF ANIMAL PROGRESSIVE MOVEMENTS)
View all from this seller>