Mutable loci in maize. [WITH:] Some parallels between gene control systems in maize and in bacteria 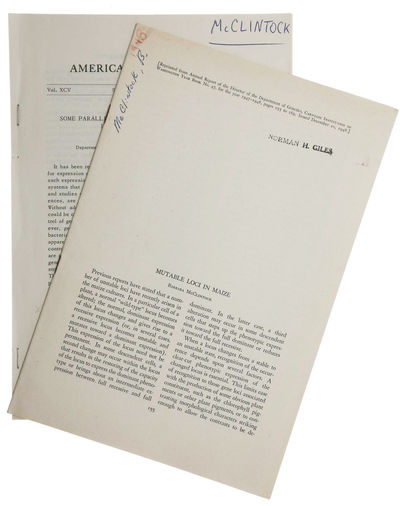 by McCLINTOCK, BARBARA
Washington, DC: Carnegie Institution, 1948. First edition. Fine. FIRST EDITION OFFPRINT of the first of the papers documenting McClintock's discovery of 'control elements,' for which she was awarded the 1983 Nobel Prize in Physiology or Medicine. "Between 1948 and 1951, McClintock carried out a series of sophisticated experiments with variegated maize that revealed mobile genetic elements that could move from one chromosome to another. Since the mobile elements possessed the ability to alter the function of neighboring genes, McClintock called them 'control elements.' Because of the focus, in the 1950's, on the discovery by Watson and Crick of the structure of DNA and its genetic implications, McClintock's discovery of 'jumping genes' was not appreciated at the time. Although she had suggested that mobile genetic elements were probably present in insects and higher organisms, it was not until the mid-1960's that mobile elements were found to play a role in the spread of antibiotic resistance from resistant to sensitive strains of bacteria. In the 1970's, the formation of antibodies was found to be based in genetic transposition. In the late 1970's and early 1980's, it was discovered that growth-regulating genes, or oncogenes, are transposed from one chromosome to another in certain forms of cancer... McClintock's discovery of mobile genetic elements in maize has counterparts in bacteria, animals, and humans; more-over, it also helped to explain how genes can change during evolution and to elucidate a series of complicated medical problems" (Magill 3, pp. 1435-4). In the second offered paper, McClintock first suggested the existence of mobile genetic elements in bacteria. F. N. Magill, The Nobel Prize Winners: Physiology or Medicine, 1991; L. Pray & K. Zhaurova, 'Barbara McClintock and the discovery of jumping genes (transposons),' Nature Education, Vol. 1 (2008).   Provenance: With ink stamp of Norman H[enry] Giles (1915-2006) on "Mutable loci". Giles was an American microbial geneticist who studied mutations of Neurospora crassa. "Mutable loci in maize." Offprint from: Annual Report of the Director of the Department of Genetics, Carnegie Institution of Washington Year Book No. 47, for the year 1947-1948. Washington: Carnegie Institution. [With:] "Some parallels between gene control systems in maize and in bacteria." Offprint from: The American Naturalist, Vol. XCV, No. 884, September-October, 1961 8vo, pp. 155-169 & 265-277. Self-wrappers, McClintock's name written on first page of both offprints. RARE. (Inventory #: 2104)
$3,500.00 add to cart or Buy Direct from
Manhattan Rare Book Company
Share this item

n.pl : n.p. , n.d.
(click for more details about USMA West Point Class of 1854 Signatures. WITH: Original Ink-Drawn Map and Watercolor View)
View all from this seller>