Aubrey Drury Archive - 2 TLS and 4 Typed Chapters of a Manuscript to the Arthur H. Clark Company 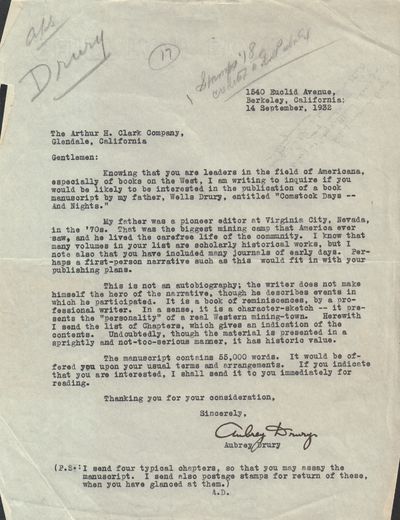 signed
by Drury, Aubrey
Very Good. Collection of 2 TLS and 4 typed chapters of the manuscript "Comstock Days and Nights" from Aubrey Drury to the Arthur H. Clark Company. Includes a total of 34pp. Dated to 1932. Letters and typed chapters measure 8 ½" x 11"; all pages, except one, are stapled together, light editorial marks throughout. Overall in very good condition. Some leaves have light creasing and wear to edges, otherwise clean. The book "Comstock Days and Nights," written by Aubrey Drury's father, Wells Drury, was about his life as true pioneer of the West, his resume being quite impressive. As a young child he crossed the plains on the Oregon Trail, became editor of numerous newspapers in the booming mining town of Virginia City, the rowdy camp of Bodie, California, and the growing city of San Francisco. He was also Speaker of the Nevada State Legislature, President of the Berkeley Chamber of Commerce and is credited as the person that brought the Liberty Bell across the continent from Philadelphia to San Francisco in 1915, which resulted in an outpouring of patriotic spirit. Wells Drury was also the last surviving editor of the Comstock papers and felt it was his duty to preserve the memory of this experience. Aubrey Drury was an author in her own right, writing "California Tourist Guide" and "World Metric Standardization, an Urgent Issue." The letters found with the chapters convey to the Arthur H. Clark Company her wish to see her father's work in print. ; Signed by Author . (Inventory #: 016337)
$275.00 add to cart Available from
Back of Beyond Books
Share this item